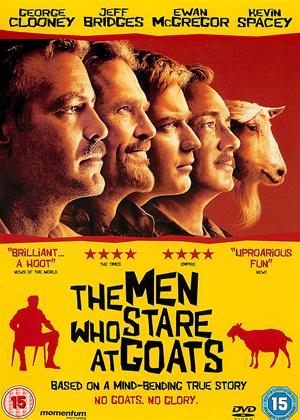 Rent other films like The Men Who Stare at Goats

Reviews (4) of The Men Who Stare at Goats

What an unusual movie. Some (like my son) will say rubbish and others (like me) will continue to watch til the end waiting for something major to happen. It didn't but don't let that put you off. It is quite compelling and yet comical. I felt sorry for the goats who only have a bit part and wonderd about the wisdom of the US military. I still am.

With so many big-name stars (George Clooney, Jeff Bridges, Kevin Spacey, Ewan MacGregor...) surely this must be a good film? Err, no. It's dreadful.

I do have a quirky sense of humour. I love off-the-wall ideas. But I sat through 90+ minutes of this and on only a couple of occasions did a smile crack my face. Jeff Bridges reprises his role from 'The Big Lebowski' - but dude, this film is dire.

The problem is that the film could have been so much better. It deserves to be better - but it falls short. It currently has a score of only 6.3 on IMDB, which should really have told me something. While I have watched worse films, recently I've learned to avoid them - but unfortunately not this time.

It appears to be an attempt at comic satire in the vein of 'Catch 22' (WW II), 'M*A*S*H' (Korea), 'Doctor Strangelove' (cold war) or 'Apocalypse Now' (Vietnam). But regrettably it is a misguided attempt and hits few, if any, of the rather too obvious targets.

It's dire. It's a turkey. It's a stinker. I'd rather eat my own leg than watch this again. And no, I can't recommend it.

Likeable Story - The Men Who Stare at Goats review by DB

This is a likeable story. It is kind of off the wall and it has some funny moments and it is well acted. If you like offbeat humour with a tinge of truth in it then this film is for you. I enjoyed it and it's worth renting.