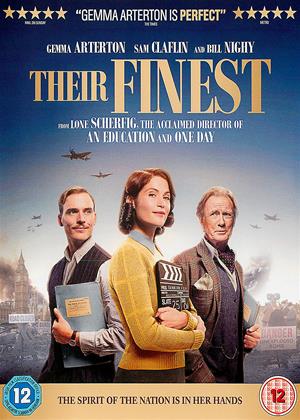 Reviews (22) of Their Finest

Feels traditional, but with modern subtext - Their Finest review by Champ

I didn't think I would be prey to a traditional yarn like this, but I loved it. It felt like one of the Sunday afternoon films of my youth, but scratch the surface and it's not that old-fashioned at all. The story gave a real sense of women starting to take advantage of the new opportunities that the war enabled for them, and how high the mountain was that they had to climb to gain equality.

The performances were all great, with Bill Nighy stealing the show, and Gemma Arterton giving a pitch perfect performance of a young woman in the 40s. I loved the romance, but (retrospectively) admire the decision the film-makers made to make the main story much bigger that the romantic sub-plot.

This film is based on a novel (called THEIR FINEST HOUR AND A HALF) - which is by a female author giving the issue of WWII and Dunkirk a very female slant.

And so it is here, as we follow unlikely screenwriter who's writing an even more unlikely female-led movie (two twin sisters to star indeed!), to try and get the USA into the war.

Well, the first half of the film is fine - obviously low budget, and the sort of film that relies on state funding (wait till the end to see the BBC and EU subsidy flags).

The second half drags terribly with silly, unnecessary a d unbelievable plot twists. These may be the original novel's fault BUT an adaptation of a novel does NOT have to be faithful. You can cut out what you want when adapting it for film.

My favourite bits were the hammy wooden film acting scenes which reminded me of the much classier movie ED WOOD.

3 stars. JUST. It'd have been 2 stars without Bill Nighy!

Their Finest is an enjoyable drama about the home front, particularly British movies made for propaganda, in WW2. See it!

Ok so I haven't said enough yet - Gemma Arterton was charming as usual, as was Bill Nighy, all the acting was well done, underplaying in the British way. Probably won't do too well in the US market for that reason.

An engaging if far-fetched offering made wonderfully watchable by the very talented Bill Nighy acting his heart out and doing that funny thing with his hands again, it's almost a trade mark with him.

Well scripted with good timing and excellent acting I found the film engaging in a bitter sweet way and there were moments that were genuinely moving and had me saying, "You can't do that!" I particularly enjoyed the romance element and the way it developed, helped along by Gemma Arterton looking her dewey-eyed best and some very fine camera work.

Not to everybody's taste, no doubt, but for me an interesting and for the most part gentle piece of thought provoking cinema.

Charming if slight - Their Finest review by JH

Wartime-set drama (during the Blitz), that's part cap-tip to working women, part acclamation to the power of cinema.

Arterton as the lead, Catrin, is hired early on as the sole woman on a small script writing team for the Ministry of Information, looking to the inspire the many at home and Americans abroad into joining the war in one swoop.

Arterton is solid enough in her portrayal, and the script nuanced enough to push the stories & plight of women in general with tact -- no grandstanding here -- and she's an entertaining, bright foil to Sam Claflin's lead-writer Buckley.

The romantic sub-plots here are a little to predictable, as is the denouement, thought Catrin is interesting enough for these to be passed off as forgivable.

The film clearly takes some delight in it's portrayal of old-timey film-making, and the actors working on them (Bill Nighy a deft-hand here as usual).

Interesting film that has too much going on at times and you need to view it at least twice or maybe three times to get the full impact of it.

Disappointing - Their Finest review by CR

In spite of perfectly good performances, this film was slow and failed to engage me. I was looking forward to watching it but it did not live up to my expectations. Shame!

Watchable but undemanding drama - Their Finest review by Alphaville

Good-natured old-fashioned British drama about making a Second World War propaganda film to boost morale after Dunkirk. One character complains that to American audiences ‘understatement translates as a lack of oomph’. Their Finest is an example of a film that could do with more oomph. The only plot point you won’t expect is the ending, and that’s a complete tonal mistake anyway.

Another character says that a film should be ‘worth an hour and a half of someone’s life’. This is little more than undemanding Sunday night television fare with a score that’s awash with lush orchestral music and plinky-plink piano. Nevertheless it bowls along pleasantly enough if you’re in the mood, with a romantic subplot, engaging dialogue and an uproarious turn from Bill Nighy as a cantankerous actor.

This is in the style of a yarn really - similar in style to Michael Palin's ripping Yarns.

The style is warm and affectionate if a bit far fetched.

It's about a Propaganda unit in World War 2 and kind of Dunkirk from woman's perspective.

Disappointingly unreal - Their Finest review by BE

Found it difficult to engage with this one. It looked as though it was being acted instead of coming across as real, which a good film should. Also the clothing looked unnatural. . The lack of creases indicated man made material was used instead of natural fibre, which was more prevalent in those days. This belied any authenticity with the clothing of the war years. Bill Nighy is always an enjoyable watch but apart from that, disappointing.

This is not a film to win awards but the story concerning the making of a propaganda film during the second world war keeps you interested. There is humour, drama and some very good performances, especially from Gemma Arterton who gets better every film she is in.