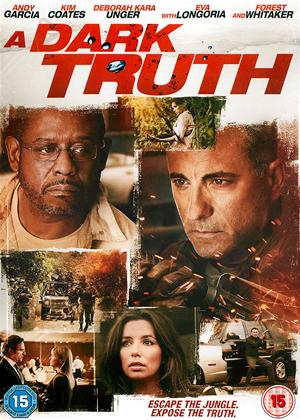 Reviews of A Dark Truth

Very few of us give a second thought to where the water drink, bathe in and boil comes from, continuing to waste it in a blasé fashion that disregards it’s impact on the environment and poverty. Dark Truth attempts to raise awareness of one of the many problems surrounding global water supply by sandwiching this under-advertised issue between action and melodrama.

Unfortunately for the film it does not pull this of with a great deal of success; where An Inconvenient Truth left many people either pained or galvanized into action Dark Truth distracts from the weight of it’s founding subject matter with too much gunfire, violence and over dramatics.

A former C.I.A agent turned radio talk host is called into to help the CEO of a Canadian water company when she discovers that the deal brokered by her brother with a large South African organization hinges on the death and poverty of the inhabitants of a small Ecuadorian village with a bountiful water supply.

A handful of attempts are made to bring home the true horror and despicable nature of the water rights crisis, including a shocking suicide committed right before CEO Morgan’s eyes. However these incidents are lost in the formulaic screenplay and predictable narrative that surrounds the rest of the movie.