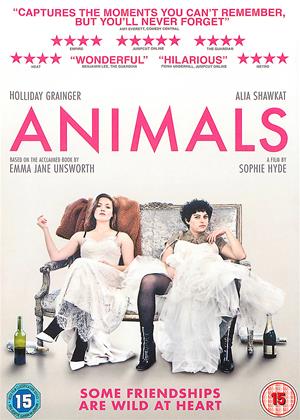 Plenty to admire, but ... - Animals review by PD

Plenty to admire here - but for me the many strong component parts of the film don't coalesce effectively enough for it to be (unlike Emma Jane Unsworth's novel) nearly hard-hitting enough. It's basically a comedy but with some dark edges about an underexamined subject (in film anyway) of female friendship, touted by some critics (not entirely without merit) as a 'Withnail & I' with women. Holliday Grainger and Alia Shawkat are pretty good as hard-partying, cocaine-snorting millennials, and many will be able to relate to the decrying of the conventionality of marriage and monogamy often declaimed by Shawkat's character Tyler. It's often insightful about the complexity of female friendships, and the interplay between Laura and Tyler is a very plausible mix of co-dependence, platonic desire and sisterly intimacy.

But .... despite the feisty amusement with which Shawkat dishes out her lines, with Grainger bantering back at equal pace, the dialogue often falls rather flat, and sometimes sounds surprisingly (given Unsworth's involvement) amateurish. Tyler is also too often Laura's foil, and although Grainger nails the Dublin accent and various local performers fill out the cast, these young folk don't sound much like Dubliners to me, and the 'sense of place' as it were feels weirdly artificial, like a very studious reproduction of Dublin youth culture made by someone who's never actually been there. Meanwhile, there are some truly awkward touches, such as some shots of urban foxes (to underscore the characters' supposedly animal natures?) which border on the trite. So all in all for me watchable enough but not one I'll be particularly recommending, especially to those who enjoyed the book.

Unfortunately there is little to like about the two lead characters, with their empty hedonism and their self-obsession.

For a formulaic story like this to succeed there needs to be some engaging qualities for the viewer to latch onto, but here there are only cynical one-liners and hard-faced nihilism.