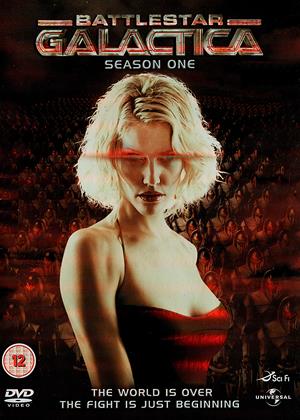 If you liked the Battlestar Galactica in the 1970 u will love this.. watch the evenings go pass watching this tv series

After the strong full length pilot, the first series of Battlestar Galatica lives up to its promise. The storyline continues the chase but this soon gives way to internal politics and relationships. The cylon threat and their plans do not full materialise until the final double episode. You can quite easily sit down and race through the shows, as there is much to saviour and quickly you forget about the sci-fi setting. Onwards to Season 2!

Having spent two years watching all the star trek series I was feeling lost as to what I could get hooked on next. I was given the dvd of the mini series as a wedding present two years ago and finally got round to watching it and indeed was hooked. Galatica is just awesome and I cant get through it fast enough. My husband cant stay awake during it but who cares!

After the fantastic debut of the Battlestar Galactica miniseries, it’s refreshing to find out that the first full season proved to be a fantastic continuation. It always seemed to be an issue with some space operas that they tend to meander and don’t find their grove until seasons later. Star Trek: The Next Generation didn’t really find its comfy spot until season three and Deep Space Nine didn’t really take off until season two. Thankfully, BSG is aided by a clear goal and firm focus that leaves little room for meandering episodes.

In fact, the very first episode of the season, entitled 33, is perhaps one of the best of the entire series. With the Colonial Fleet already on edge for running from the Cylon fleets pursuing them, find themselves in a difficult situation. They lose one ship in one of their jumps through space and go back looking for it. They do find the ship but something feels off. There’s no communication and it can’t be confirmed who is aboard if anyone. A tough call needs to be made of whether or not to shoot down the ship when it starts heading towards the fleet. Is it a trap or are the survivors still onboard? The episode never gives a direct answer and takes the high road of asking the question rather than getting a firm answer.

It’s this staging that sets a great tone for the rest of the series, where moral questioning is constantly brewing in the fight against the Cylons. With the Galactica now knowing that there are Cylon sleeper agents among them, distrust brews throughout the series. Who can you trust and who is merely pretending to be human? The show doesn’t give easy answers either. We know a few people who are Cylons that the fleet does not know about but so many that kept in the dark. The show then becomes more of an intriguing mystery, leaving viewers constantly speculating on who is the next Cylon.

The many storylines that swirl about collide wonderfully. A few survivors remain on Caprica in a constant chase of the remaining humans trying to flee, some of them unwittingly being led astray by Cylons for the long game of deception. Some of the crew find themselves conflicted with how their new and continuing relationships can remain in such a dire situation. And the few glimpses of Cylon in-fighting showcase that there’s more to these villains than just being the cold mechanical devils chasing humans through space.

The cast remains in top form. Edward James Olmos gives a powerfully subtle performance as the no-nonsense Commander William Adama. Mary McDonnell brings a wealth of emotional decisiveness in her political motivations to keep the rest of the fleet at ease and free from the panic of their current situation. Katee Sackhoff continues to kick butt as the toughest and most daring Viper pilot aboard the Galactica. Tricia Helfer spends most of this season as Number Six within the head of Dr. Gaius Baltar but still provides gutsy commentary on this doctor’s guilty feelings.

The show remains just as much of a technical marvel as the miniseries, boasting thrilling space battles and making the Cylons seem intimidating in their chrome terror. Keep in mind this show came out in 2004, where most top-tier special effects came from the likes of Farscape and Enterprise. BSG not only has effects that are just as strong but creates an entirely different mood from it competition in how it presents its tactile world of humans, robots, and cyborgs.

The first season ends on the perfect cliffhanger to get those fresh addicted fast. As someone who watched it during its initial run, it hooked me instantly from this season. This isn’t just a great start to a highly addictive series but perhaps one of the best sci-fi shows of the 2000s.