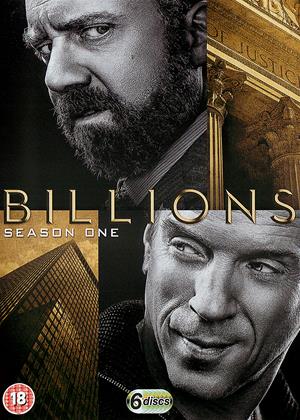 The premiere of Billions is building a straightforward premise into something extraordinary, without it being too tedious or self-righteous in its own way. Its main narrative course flows through archetypes that are often times reversed as episodes go by and characters put their dominant traits on the table. In a sense, Billions: Series 1 is depicting the primordial battle between good and evil with an unpredictable outcome that fuels one’s imagination and provides for a thrilling, rip-roaring watch. Finally, The Sopranos got their spiritual successor, which shows no signs of slowing down, or at least for the time being.

Billions jumps in medias res by putting two very distinct personalities against each other: Chuck Rhoades - morally righteous state prosecutor with perfect prosecution record, against Bobby "Axe" Axelrod – hedge fund shady figure who boasts with too much dollars to be just your friendly ‘businessman’ next-door.

While the two of them engage on all fronts possible, their personal lives are carefully unthreading for us, the peeping Tom’s, to keep detailed notice. After a while, it seems that the two are not very different from each other: they both want fame, money and status; it’s their approach to getting what they want is what separates them, and they want the same thing: to persevere in the face of overwhelming odds against themselves.

Given the axiom that big budget dramas are only worth as the worst of their written parts: Billions: Series 1 comes off good even at its most tame. Most of the times however, the writing, production and dialog are on point, while chemistry between characters (and actors for that matter) is recognizably outstanding. Damian Lewis, who we’ve come to know as mostly a good guy, gives his best performance in years. Paul Giamatti on the other hand, who has always jump spectrums when it comes to character alignment, comes off as convincing, stoic and uncompromising – even if it means shedding his own fur to prove a point in a given circumstance.

One facet where Billions: Series 1 falters is giving out information. Things develop slowly, and at times it feels as if the producers deliberately choose to omit data in order to build a non-existing conflict – a big revelation that ultimately falls flat on its face. Such flaws are understandable and take out little from the overall undergoing. To sum up: there’s not really anything that breaks Billions: Series 1’s meticulously planned structures.

Ultimately, one can only hope that Billions: Series 1 will proceed with the same flair in the future, providing thrills and excitement that will push audiences to yearn for more.

Also, watch out for certain sex scenes so they don’t catch you off-guard.