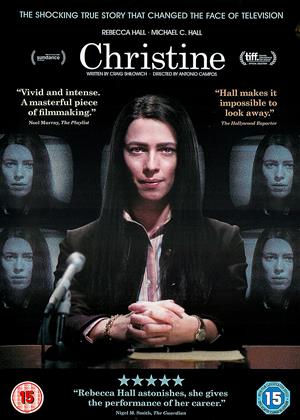 Christine is the true story of a TV journalist at a small Florida TV station in 1974, whose career and mental state slowly disintegrates, resulting in her on-air suicide. Rebecca Hall's performance as Christine Chubbock is totally compelling, and the period detail of broadcasting techology, clothes, interior decor etc. is convincing. If the film has flaws, it is that the subject matter makes it increasingly difficult to watch (especially as you know how it will end), and that at almost two hours it is probably twenty minutes too long. This is definitely not a fun movie, but if you like serious dramatic films you will be impressed.

I have given this film 5 stars because Rebecca Hall totally blew me away with her amazing performance as Christine.

Christine works at a small local news station. She is paranoid about everything, her work performance, her sexuality, her mother and her prospects. This paranoia, obviously due to manic depression, manifests itself in her workaholic mentality (as her tragic life is so empty), sexual frustration, regular angry outbursts and the inability to rationalise things. This is all magnified when she has a health problem.

The pressure building slowly, until the culmination of her rationalisation.

I felt so much for Christine and was in awe of Rebecca's acting. She really had me engrossed with the whole demeanour of the unstable Christine. Superb performance .

For me this was too slow a build up to the actual event & I stuck with it even though I found it boring.

Excellent - Christine review by BE

A beautifully measured performance from Rebecca Hall as Christine, a tv journalist and newsreader. Ultimately very sad as unable to cope with a stagnant career and unfulfilled personal life, she chooses to end it in front of television viewers, watching the news bulletin. Miss Halls is riveting to watch and being the daughter of Peter Hall (one time Director of the Old Vic etc.), would have made him very proud. Also ten out of ten for the very authentic attire and equipment circa 1970s, lack of a disruptive screen score (apart from appropriate pop songs heard over the radio), quiet colour and a very realistic film setting. Very well done.

Disclaimer: in order to fully enjoy Christine, you have to know as little as possible of the life of Christine Chubbuck. In fact, it’s best if you go into this whilst knowing nothing at all. To this extent, it could be easily said that Christine is a mesmerizing experience of depression, loss, grief, and a heartfelt drama about a Florida reporter Christina (Rebecca Hall), whose struggles through life can serve as a lightning beacon for anyone thats find themselves on the other side of the abyss. Again, try to avoid spoilers as much as possible. Heck, if you feel like it – feel free to avoid even this.

Again, the film follows Christine Chubbuck – an ambitious reporter on-the-rise who finds herself stuck between a rock and a hard place. And all of this because she just can’t connect with other people; in fact, she constantly feels as if she’s a stranger in her own skin, and so forming lasting relationships is something to be unheard of in her life. During the film, many others try to pull her out of the darkness and into the normalcy of the everyday life, however this is easier said than done since the cyclical nature of depression slowly starts to get its toll on the protagonist in mind. Interesting to note here is that each and every character who tries to reach for Christine, actually ends up not accepting her inner struggles and starts viewing depression from their own individual lenses. Of course, this doesn’t make Christine’s job any easier.

At one time, it becomes clear why Christine is disconnected from the rest of the world: it’s just that no one actually tries to listen to her and everyone offers cheap solutions to her considerably misunderstood ailment. Her mother is absolutely positive that Christine needs a man in her life; one of her friends offers to console Christine with an ice cream. The other anchor on the show where Christine works directs her to therapy. And it’s not a wonder why she can’t feel any real connection with anyone – no one offers a shoulder for her to genuinely cry on.

This aspect of the film (the misunderstandings) is done with a surgical-like precision and serves as the focal point of Christine; often, two individuals enter in a dialog that neither side comes out better off of it. In fact, when all is said and done, it’s like they didn’t even have the conversation in the first place. And so is the nature of Christine’s unheard yields for help.

Finally, if you’re a lover of slow-burning, uncomfortable cinema that most family reunions are made awkward with – then Christine may just be the perfect pick for you and your family. Just kidding, watch this with no one but yourself.