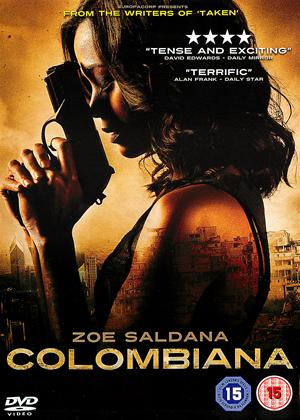 If you've grown tired of all these badly made so called Blockbuster movies with their poor CGI and special effects and yearn for a good old fashioned action thriller in the classic 70's style, then look no further. Colombiana is a film with balls, very big ones and it rocks all the way. Giving us the classic 70's action thriller style, brought right up to date, Colombiana is a girl on a mission. Reminding me a bit in style of the latest Bond movies, this is action all the way, but very cleverly done. A great script, good acting and very well directed. the stunts are for real, no nasty CGI here and it's action all the way. I'm really fussy and like a film that is well made, having grown tired of seeing all these poorly made and unoriginal so called blockbusters that have come out of late, I found this film refreshingly exciting and was on the edge of my seat all the way. A real cinematic ride, all my mates loved it, a great film in every sense and well recommended.

Not bad - but it's not 'Léon' - Colombiana review by RP

Luc Besson has directed, written or produced a host of action films, from the excellent 'Léon' to the dire 'Transporter' series. 'Colombiana' was co-written by Besson and feels a little like a follow-up to 'Léon' in that the story is of a girl who sees her family killed (as in 'Léon'), wants to become a killer so that she can take revenge (as in 'Léon'), then succeeds (perhaps how the Mathilda character might have wished in 'Léon').

Here, the central character is Cataleya, played by Amandla Stenberg who looks the part, is both suitably athletic and good looking and does a good job of kicking ass, but is otherwise an unsympathetic character. I wanted to like her but found her somehow lacking and the acting a bit wooden.

In fact much of the acting was wooden, the dialogue a bit ropey - but who cares? When a film is directed by someone with the name Olivier Megaton, I expect a megaton of action - and that's what you get here. The film is well photographed, there's plenty of flash-bang-wallop, the baddies are bad, the sexy heroine gets to kill all before her, and she even seems to be adept at parkour. What's not to like? It's not bad if you don't look too hard, otherwise you'll see far too many plot holes...

Unfortunately, not only are there plot holes but there's lots of shooting but no wounds, a few bedroom scenes in which no clothes are taken off and the film seems to have been edited to achieve a lowly 15 certificate. It would have been better with a harder, more adult edge to it.

But never mind, just sit back and let it wash over you - it's worth 3/5 stars from me. I've seen an awful lot worse.

This year sees the newest release from the writer and director of such cult hits as Leon (1994) and The Fifth Element (1997) and Luc Besson fans will see his stamp all over this one. Colombiana is the story of Cataleya, a Columbian girl who witnesses the murder of her parents at the hands of a greedy drug lord and later vows revenge.

Cataleya escapes to America where she finds her uncle Emilio and begs him to teach her how to kill, at first the man refuses but eventually the two strike a bargain whereby Cataleya promises to go to school if her uncle will teach her to become an assassin.

This strong female based action is not dissimilar from several of Bessons previous films, in a strange way almost acting as a follow-up to Leon in which a young Natalie Portman learns to become a hit man. Yet it lacks the class and indefinable tenderness of Leon. Where Portman’s character blossoms through her relationship with her tutor, Cataleya’s story lacks emotion and throws you straight into the action and the bloodshed.

As female lead action film’s go, Colombiana is average, with Avatar’s Zoë Saldana portraying a sleek and sexy assassin with very little depth or opportunity for emotional development. The film is fairly predictable and has been condemned by many as playing to the stereotypically negative Hollywood idea of Columbia. Yet it is perfectly acceptable if taken entirely on surface value; if all you’re looking for is gun fire, ass-kicking and sex appeal then look no further.