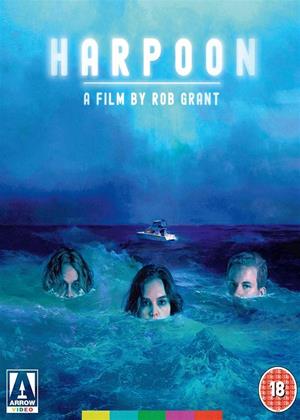 Synopsis:
They say every story about love, friendship and betrayal extols a key lesson in virtue and morality. This is not one of those stories. Jonah (Munro Chambers), Richard (Christopher Gray) and Sasha (Emily Tyra) have been friends a long time...maybe too long. Following a ferocious bust-up, Richard tries to make amends in the form of a sailing trip on his family yacht. After all, a friendship is the kind of ship that never sinks - until the yacht breaks down and the trio are left stranded in the middle of the ocean.
As food and water supplies start to sink and rivalries, dark secrets and sexual tension start to surface, the question becomes: which of these three broken humans will run out of air first?
Actors:
Brett Gelman, Munro Chambers, Emily Tyra, Christopher Gray
Directors:
Rob Grant
Producers:
Julian Black Antelope, Kurtis David Harder, Michael Peterson
Writers:
Rob Grant, Mike Kovac
Genres:
Comedy, Horror
Countries:
Canada

'Harpoon' begins with speed and charisma, as we quickly get to a violent (almost Road-Runner absurd) punch-up between old friends 'Richard' (Christopher Gray) and 'Jonah' (Munro Chambers). Richard's partner 'Sasha' (Emily Tyra) intervenes, as a narrator chops in and out giving us punchy biographies about the characters and fun facts. The short version is that Richard is rich and uses his money to keep his friends happy, Jonah is poor and has always had terrible luck, and Sasha is tough and no-nonsense, acting as their referee.

Shamed into an apology, Richard takes them all out on his leisure boat to get drunk, only for things to take a turn for the worse...

To say any more would involved giving away several of the film's surprises, and that would be a crying shame because Harpoon is full of extremely wry humour and excessive violence, and seeing how the relationships play out without too much prior knowledge is enormous fun.

Rob Grant and Mike Kovac have written a script that is regularly very funny, has characters that are much richer and more interesting than usual, and isn't afraid to veer into genuine tension and fear. Although there are many moments of horror that are played for absurdity and appalled laughter, there are also stretches that are genuinely sweating with fear and uncertainty. This is down to some terrific writing and direction, but also a trio of amazing performances.

Gray feels like he's being doing this for decades, exuding a confidence and swagger that far exceeds his experience. Chambers is incredibly winning with a role that demands likeability in the face of seeming cowardice, and Tyra is terrific as the 'adult-in-the-room' and voice of reason.

Nicely, everybody gets to stretch their legs dramatically - these characters are not the one-note roles viewers might expect from the opening, and they go through a whole gamut of emotional tribulations before things get to the climax.

Brett Gelman also deserves special mention as the slightly 'Malkovich-sounding' narrator who delivers dryly humorous nuggets of comedy or information at regular and crucial moments in a way that's both welcome and enriching. His presence as a voiceover is never explained, but it doesn't break the immersion of the movie and the experience is enhanced by it.

The only issue with the film is that one character gets afflicted by harm that we are repeatedly shown is undeniably real, but their physicality and ability to move around with liveliness when required at several moments later on seems to forget it. It doesn't break the later scenes or significantly harm their impact, but it's a very rare moment of sloppiness in a script that's otherwise astoundingly tightly written.

Harpoon spends most of its running time as a 'three-hander' between Richard, Jonah and Sasha. Despite this, the intensity of the writing and performances and the skill of the directing ensure it never gets remotely dull and never feels constrained. Everybody brings an extraordinary A-game to bear, and it's a wickedly funny and twisted little thriller that isn't afraid to make you cringe in alarm.

A hell of a calling-card for everyone on board (sorry), all of whom remain people to watch in the future.