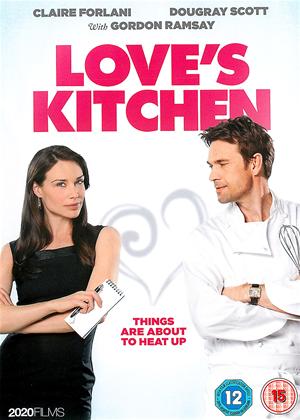 Sign up
I Don't Know How She Does It

Love’s Kitchen is a British romantic comedy with a veritable feast of recognisable faces, from Eastenders Zoe Slater (Michelle Ryan) to the distinguished Simon Callow and even a cameo appearance from none other than Gordon Ramsey, the film promised to be everything a British film should be.

The film tells the story of a failing chef, Rob Hadley (Dougray Scott), whose love of cooking died with the death of his wife. However, a terrible review coupled with his daughter’s insistence persuades him to relocate to a quaint London suburb where he sets up the restaurant he and his belated wife had always dreamt of.

Things do not get off to the best start as their only costumers are ale swilling locals, until a review of his food by American born foodie, Kate Templeton (Claire Forlani), draws huge crowds from the big city. Unbeknownst to Rob however, this enchanting woman is also the person who wrote the scathing review that forced him out in the first place.

The film is relatively predictable but still perfectly enjoyable in a terribly British way; if fields and old fashioned pubs with food that’s a bit posher than it really ought to be are your kind of thing then Love’s Kitchen is all that brought to life. Although a little slow and obvious, a smattering of comedy and some strong acting help to make the film perfectly appetising.