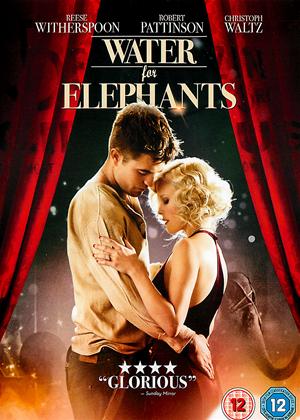 Reviews (1) of Water for Elephants

It is the 1930s, the time of the Great Depression and Prohibition. Bright young man studies to be a vet but after a family tragedy jumps a train and joins the circus. The circus owner is driven, even obsessed, not only in his desire to keep his business on the road but also by his possessive jealousy of his beautiful wife, the star performer - who is of course the object of the young man's infatuation. The fortunes of the circus are turned round by the purchase (from a failed circus) of Rosie the elephant but ultimately destroyed by the cruelty and obsession of the owner.

Bookending the film is an intro and outro by the vet as an old man that provides a rather good ending. Actors include heartthrob (?) Robert Pattinson as the young vet, Reese Witherspoon as the woman and Christoph Waltz in the stand-out performance as the circus owner. This is an excellent film. I thought it was going to be too soppy and sentimental for my tastes, but no - it has a hard edge to it that cuts through what could easily have been an over-schmaltzy melodrama. Entertaining stuff - 4/5 stars - recommended.

Everyone knows Robert Pattinson for his role as Edward in the hugely popular Twilight series. Branching out into the more daylight areas of the circus ring Pattinson portrays the son of Polish immigrants living in the United States in the Great Depression.

Forced to leave veterinary college on the brink of his final exam Pattinson, playing here Jacob Jankowski who finds himself employed as vet and key tender to the elephants in a travelling circus.

In many ways his character in Water for Elephants is not so different to the character he is renowned for playing in Twilight, intense and sorrowful as well as hopelessly in love with someone he can not be with, Jacob watches as his boss physically and emotionally tortures his performers – animal and human alike. Eventually all comes to a head and Jacob and the beautiful star of the circus Marlena (Reese Witherspoon) concoct a plan to escape together. However their boss, who is Marlene’s husband as well, finds out and kidnaps Marlena forcing her back into working for him. Jacob rushes to rescue his lover and subsequently finds himself in the middle of one of the most horrific circus tragedies ever.

The story is told through the eyes of an elderly Jacob, so any doubt that the audience ever had that he would not make it safely out is quashed from the get-go. As expected the film ends happily for Jacob, Marlena and their elephant Rosie.

The film has something of the Moulin Rouge about it, exotic and acrobatic performances and secret love affairs. Unfortunately Water for Elephants lacks Moulin Rouge’s spark and glamour. Set in the 30’s the air of depression, poverty and desperation seeps into the circus from the outside world, and subsequently leaves it feeling a little stale and grey. The excitement and romance of the circus scene is lost and thus the film winds up being predictable and toneless, even the emotional extravagance expected from most romances seems as diluted as the bootleg booze.Water for Elephants