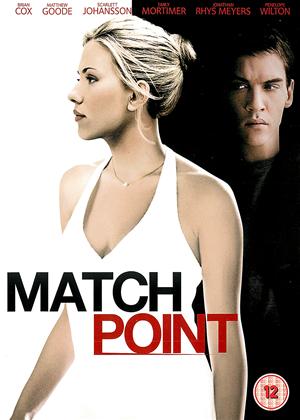 If you have read crime and punishment by Dostoyevsky you will know that Allen has too and is obviously a huge fan of the Russian authors work.

A deep film dealing with luck, love, lust and despair.

A young former tennis pro (Rhys Meyers) takes a job coaching the game, whereupon he meets a young aristocrat ( Goode) who befriends him and takes him into the bosom of his family's extremely affluent lifestyle. His new friends quickly become his family when he meets and falls for Goode's sister (Emily Mortimer) and thus is set financially for life. Of course it couldn't be this easy and a problem arises is his infatuation for Goode's fiance Scarlett Johansson.

Great acting by the predominantly Brit cast and a wonderful performance by Johansson as Nola Rice a wanna be actor who likes the drink.

I thought this film was profound and would thoroughly recommend it.

A positive surprise: What begins as a love story turns into a crime film. Not what I would expect from Woody Allen. A very good performance from Jonathan Rhys-Myers who manage to bring his dark side to the screen thru his character. Also look for James Nesbitt as a police man in the final scenes. Good and fascinating entertainment.

Should have watched longer - Match Point review by JD

I watched the first 30 minutes and could stand it no more. A tennis coach is spoilt by an over-privileged family and marries their daughter but covets his brother-in-law's girlfriend. Great stuff if you liked Dallas or Howard's End but this upper-class romantic betrayal stuff is not my thing and I ejected before it got to the crime intrigue. My advice would be to get it either if you like Bronte or skip the first 40 minutes.