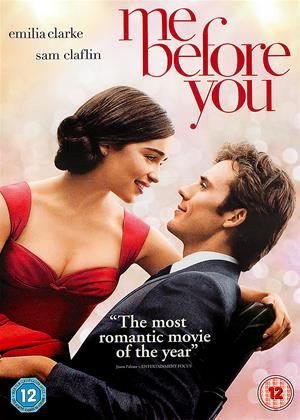 Synopsis:
Sometimes love takes you where you never expected to go. Louisa "Lou" Clark (Emilia Clarke) lives in the English countryside. Her normally cheery outlook is put to the test when she faces her newest career challenge: as caregiver and companion to Will Traynor (Sam Claflin). Involved in a life changing accident, Will has all but given up. That is, until Lou decides to show him that life is worth living. Embarking on a series of adventures, both Lou and Will get more than they bargained for, and find their lives - and hearts - changing in ways neither one could have imagined.
Actors:
Emilia Clarke, Sam Claflin, Janet McTeer, Vanessa Kirby, Eileen Dunwoodie, Pablo Raybould, Gabrielle Downey, Henri Charles, Samantha Spiro, Brendan Coyle, Jenna Coleman, Alan Breck, Matthew Lewis, Muzz Khan, Charles Dance, Stephen Peacocke, Ben Lloyd-Hughes, Richard Goulding, Diane Morgan, Stephen Chance
Directors:
Thea Sharrock
Producers:
Alison Owen, Karen Rosenfelt
Writers:
Jojo Moyes
Studio:
Warner
Genres:
British Films, Drama, Romance
Countries:
UK

Reviews (3) of Me Before You

Ahhh! - Me Before You review by JJ

Get the tissues out, for a great story, not wanting to give story away but amazing story, good actors, a very good looking bloke & lovely funny lady very moving & sad I loved watching Boohoo!! :-(

ME BEFORE YOU - Me Before You review by SM

Why does a book always weaken watching the film. I had only just read it and it felt more powerful than the film. Your own imagination I suppose? It's ok to watch but too polished and light like Bridget Jones!!

bittersweet! - Me Before You review by MC

An enjoyable film even having watched it before. A more unusual storyline - had me laughing in places and yet sad at the anguish of those facing very difficult decisions, Convincing acting all round.

Me Before You review by Adrijan Arsovski - Cinema Paradiso

Me Before You is a charming little movie with a rather innocent message that spans across cultures and teaches people to always better upon themselves, challenge their beliefs and live boldly. Yup, it’s preachy, but then again – who isn’t these days?

When synthesized, Jojo Moyes’ novel that came to fruition by director Thea Sharrock is a strange mix of romantic comedy, drama and tear-jerker all at the same time. It dances between genres and conventions and never truly finds itself amidst the melodrama that is plaguing its narrative cohesion. Was this intentional? Probably not, as Me Before You is taking itself rather seriously for what it’s actually trying to portray.

The story begins when poverty-struck Lou Clark (Emilia Clarke) decides enough is enough and moves out from her parents’ house to look for prospects in the scarce pool of possible job opportunities. That’s when she nails a caretaking job for a certain Will Traynor (who is a millionaire quadriplegic) and his parents own most of the countryside where Lou lives. At this point, it becomes clear that Me Before You will draw upon the all-too-impossible melodramatic concepts notoriously present in every Spanish-spoken soap opera since 1990 onward.

As Lou’s current boyfriend Patrick (Matthew Lewis) is too complacent for anybody to care about his presence in the film, she and Will quickly develop a kind-of, sort-of mutual romantic connection which fuels their lives as each day passes by. Will, previously a famous and respected jock, is now fixed to a chair and paralyzed from the neck down. Is Lou’s charisma and positive take on life enough to bring him out of his dark sense of mind?

The acting is decent, if by decent you accept Emilia Clarke’s overacting at certain points, and under-performing at others. Her facial expressions should surely reflect her deep caring and understanding for the condition, both physical and psychological, Will finds himself in, but instead – it comes off as forced and unnatural and certainly calls upon the ‘cringe’ factor at its worst.

Other actors play well, if not better than Game of Thrones’ action star Emilia Clarke. Sam Claflin tackles his acting duties well, while Jenna Coleman imposes herself as the next big thing in a role that greatly adds to the depth of Lou’s character, by playing her sister. Their on-screen connection seems genuine, warm and is possibly a sub-plot which should’ve been more examined than it actually was.

To conclude: it would be unfair to rate this film on its message alone. And that message is very obvious to a point where it becomes preachy. Overall, if you’re in the blues, provided you’re handling your box of tissues well - Me Before You will release that pressure and vent your sorrow for days, even weeks to come.