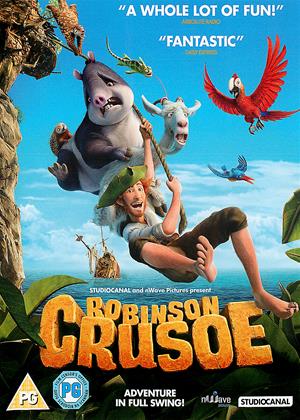 Kids will love it - Robinson Crusoe review by NC

Good film for kids. Action and colour and animals. No expensive names in this one, for once. Must be a bonus.

Robinson Crusoe embodies all of the tired clichés of children’s animated movies as if the studio is desperately trying to be the next DreamWorks. Studio nWave, known for such forgettable animated movies as Fly Me To The Moon, has taken the stories of the iconic survivor and filtered them through the commercial marketing machine for CGI feature films. You can’t just have Crusoe on an island; he needs to have silly animals friends that can talk and narrate the movie. Kids don’t care much about some man who learned to survive on the wild, but they’ll listen to a talking parrot, a sassy tapir and an elderly goat that speaks like a senile old man. They don’t care about the specifics of survival, but their eyes will be transfixed on a slapstick chase scene.

To their credit, I must admit that the children at the screening were paying attention to the screen at all times. But what were they paying attention to? There were no memorable jokes aside from the tapir shaking her rump at the screen. There are no relatable characters, as all of them appear as lesser, watered-down versions of previous players of other animated movies. I think what kept their attention were the pretty colors and the fast pacing. It’s pacing that rushes towards the next slapstick bit or explosive fight scene, never slowing down to develop our characters past expositional dialogue.

Focusing less on Robinson Crusoe, which explains why the movie is dubbed The Wild Life in the US, the movie follows the parrot Mak who relays his tale to some mice. Before Crusoe crashes on his island, Mak dreams of what may lie beyond his island home where the other animals believe he is crazy for having such thoughts. When Crusoe arrives on the island, the local wildlife is terrified of this human creature and keeps their distance, fearing the worst. Their fears are not entirely unwarranted as the meek Crusoe must eat and decides to hunt at first. But Mak is intrigued by this human and wants to know more about them. Though none of the animals can speak the same language as man, Crusoe learns to work with the animals to find fresh water and make a shelter.

To provide some conflict, the villains of the picture are a pair of evil cats that hunger for meat. I would think that surviving on an island without any humans was enough of a struggle, but the movie needed some cats so that there can be obligatory action scenes. These cats do have a certain level of empathy the way one of them is pregnant and requires food for the multitude of cats that are birthed. Could this be the common ground for our heroes and villains to connect? Nope, just an excuse to animate more cats for more of a fight for survival. I’m sorry, a “silly” fight for survival with lots of slapstick and explosions.

I wanted to like Robinson Crusoe because it’s a solid source, has a great theme on paper and the animation is not too shabby for this studio. But it just lies limp as a picture that wants to have all the fun physical moments, but put in none of the effort to earn such comedy. There’s nothing offensive or inappropriate to this picture, but no charisma or unique energy to be invested in either. Kids could watch it if parents really needed a distraction, but it’s the equal of giving them a bland rice cake as a snack; there’s nothing bad about it, but nothing to be gained either.