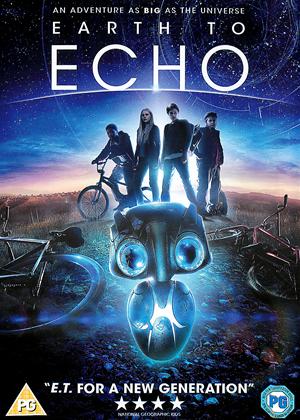 Synopsis:
'Earth to Echo' is an amazing story that is full of excitement and extra-terrestrial wonder! Tuck, Munch and Alex are a trio of inseparable friends from a quiet neighbourhood who long for adventure. One day the boys find a cryptic signal on their phones and convinced that it is part of something bigger they set out on a quest to find the source. What they discover is something beyond their wildest imaginations - launching the boys on an epic journey as they attempt to help their new friend make his way back to his home planet...
Actors:
Teo Halm, Astro, Reese Hartwig, Ella Wahlestedt, Jason Gray-Stanford, Algee Smith, Cassius Willis, Sonya Leslie, Kerry O'Malley, Virginia Louise Smith, Peter Mackenzie, Valerie Wildman, Roger Hewlett, Mary Pat Gleason, Marilyn Giacomazzi, Frank Lloyd, Chris Wylde, Brooke Dillman, Myk Watford, Tiffany Espensen
Directors:
Dave Green
Producers:
Ryan Kavanaugh, Andrew Panay
Voiced By:
Sean Carroll
Writers:
Henry Gayden
Studio:
E1 Entertainment
Genres:
Action & Adventure, Children & Family, Sci-Fi & Fantasy

Sign up
Star Wars: Episode II: Attack of the Clones

Reviews (5) of Earth to Echo

an ok film - Earth to Echo review by gazmb

I enjoyed this film , the young actors were very good. The film is a bit between W.A.L.L.E, Super 8 and E.T I thought. it is probably good for all the family to watch.

Just a pleasant 'feel good' film - grown ups should enjoy too. The found footage aspect is a little off-putting at first but you soon get used to it. One or two excellent special effects, cute alien (perhaps could have done more with it) and believable characters.

A film all the family can watch. Three boys receive signals on their phones showing the location of something unknown. They ride out and find a tiny, battered device with an alien inside. It leads them to more locations to find parts to rebuild its space ship. All the time mysterious men also are in search for the alien follow heir every move. If you liked ET you may like this film.

Ok for the little ones - Earth to Echo review by IL

Awful film, the acting was 3rd rate, the script was long winded and the special effects were dire. As I say it will probably be fine for the kids but mum and dad will soon get bored.

A modern version of ET?? - Earth to Echo review by Jay

Whilst the film is a pleasant watch, it suprised me how they got away with using a storyline that is so similar to ET. The premise is exactly the same with the addition of mobile phones.

Not a bad film by any account but not a great one either. The acting from the younger cast is actually pretty good considering there are no big name actors.

Earth to Echo is one of those films where you watch the trailer and see the poster and you honestly do not know what to expect. The poster, for some reason, reminded me of Wall-E, while the trailers reminded me more of Super 8 and E.T. None of these things are bad, but film is a medium where audiences always want something fresh and new. For me, Earth to Echo was different enough to make it entertaining, but this probably will not be the same for every viewer.

One would think the film to be about zombies when you see the way these tweens are addicted to their phones. Not quite. When a group of misfit kids start getting strange text messages and their phones glitch and go screwy, they decide to try and work out what is happening. They manage to decrypt a map, and, with their cameras and GoPros, etc., all turned on, they head for the centre of the disturbance. It is there that they discover an alien - which they name Echo - and find themselves protecting the harmless creature while running from the encroaching authorities.

There are more good then bad aspects of this film, so I will get the bad over with first. I do not know how many more ‘found footage’ films can be made. Surely everyone else is bored with it too? This is essentially a little-kid version of a ‘found footage’ film, however some of the story makes it seem rather inappropriate for kids. Parts of the film involved drinking and underage partying, so parents need to do their homework before deciding to show this to their kids.

Now the good parts. The visual effects were pretty good. I have seen a lot worse, and I could not really find fault with these. Echo was interesting, and who can forget the disassembling and reassembling of the truck?

The script was both funny and clever, with interesting dialogue that sounded real-enough, and not overly fake.

The kid actors did a good job too. None were ‘known’ actors that you had seen everywhere, so it is refreshing to see new talent. They have a good chance at a future in the industry.

Reviews have been pretty mixed. Some see it as good entertainment that will keep the kids happy, with the parents reminded of their childhood and watching E.T. Other reviews have not been as welcoming. With so many similar films that have large fan followings, it is easy to see why some reviewers have been harsher and more protective of previous works.

There are always going to be positive and negative reviews for every film, and the main thing is to check them out for yourself. Earth to Echo is a surprisingly enjoyable film that is intelligently written and should not only keep the kids entertained, but also the parents and guardians who watch it with them.