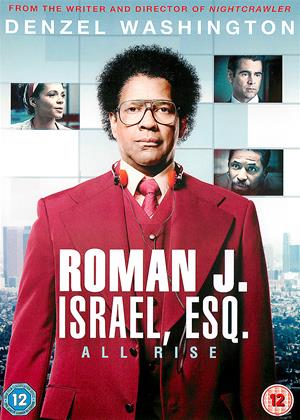 Who is responsible? - Roman J. Israel, Esq. review by NC

Never seen a film actually made. Presume director is to blame? How could you get Denzel and Farrell in a fairly ordinary film? The story is OK, the script is not the best, but is there to be worked on. It just lacks the flair and credibility.

Denzel is supposed to be almost a Rain-man type, but does not induce any empathy, Farrell is a hardcase top lawyer, but does not imply that he actually is.

All a bit wavy and drifty.

Denzel Washington has such a power as a performer that he’s called in to perform CPR on a rather routine biopic of a life somewhat mundane. It’s not that the legal figure of Roman J. Isreal Esq wasn’t an interesting figure. There’s an interesting aspect to his character that seems admirable in his simplicity of a modest lifestyle and an unswerving commitment to virtue. But it’s a bit of a shame that the film only comes across more interesting for how Washington embodies more of these traits than the man he is playing in the script he is given.

Roman is at least an interesting person to follow even if his story doesn’t pack as big a punch. He works as a Los Angeles lawyer for a small amount, trying to the right thing with his MP3 player always in his ears. He’s astute in law but brash when it comes to representing clients. While he does reserve himself with a calm delivery, he’s not afraid to call out unlawful aspects during trials which only land him in hot water with judges, forcing him to pay fines. He’s the kind of frustrating lawyer to deal with as the knowledgable nerd who can’t help but correct or go after the incorrect, niceness be damned.

Roman’s life is one of quiet desperation. He resides in an apartment with more legal documents than anything else. He eats peanut butter sandwiches and deals with the noise of construction next door as he works deep into the night, sometimes calling the city to report unlawful construction hours which go ignored. Nights are spent without relaxation, studying legal documents by the pound for the next case. His devotion attracts the attention of the large firm of George Pierce (Colin Farrell), who takes in Roman after his partner succumbs to a heart attack. Roman is knowingly hesitant to take the job and George soon comes to understand why. Roman is still so brash that he not only doesn’t speak well with his co-workers but takes it upon himself to jump onto cases, only adding fuel to fires with his prodding.

Washington’s performance has a subtle charm to how he never bursts out in anger, always keeping concealed behind his cutthroat legal methods. There’s an awkwardness to how Roman tries to decompress and learn to take things easier. He tries to go to the beach, buy some shorts, and grab a refreshing bite. This isn’t him. He prefers being drowned in legal notes and fighting for others. It’s a fight that continues to such a degree that some of the anger bubbling under the surface starts to rise up when going after information. George doesn’t approve. He’ll later try to form a romance with Carmen Ejogo but it takes a rocky route in his own weird way of speaking with others. Even Roman’s decision to leave is conceived in his own special manner of writing up a deposition condemning himself, something only a lawyer so mired in his profession could muster.

There’s a somewhat fantastical nature to the story that I have to imagine bits and pieces have been retooled, a fallacy of most entertaining biopics. What I can say for sure is that Denzel jumps into this role with both feet, taking care to never go the overly dramatic route with Roman, even during scenes where he bites back over the phone at those holding up his cases. This film isn’t too shabby from that aspect but I couldn’t help looking at this film and feeling there was something more left unexplored, considering it was directed by Dan Gilroy of Nightcrawler fame. In Nightcrawler, there’s a scathing commentary on the nature of media coverage. In Roman J. Isreal Esq., there’s only one quirky lawyer so locked in his tunnel vision of the world we can’t see the bigger picture.