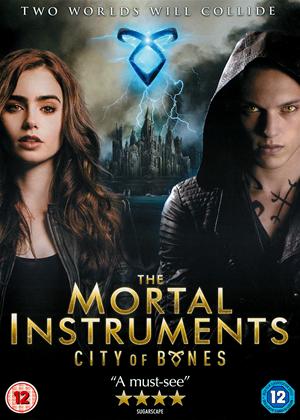 Rent other films like The Mortal Instruments: City of Bones

Reviews (1) of The Mortal Instruments: City of Bones

Based on a series of books, having not read them I can't say how good an adaptation it is from them. However what I can say is that if you like a story line where where good Vs evil, in a modern day setting where warlocks and werewolves are the good guys and gals and the baddies are demons, then this is something for you. If you've seen Buffy or the Vampire Diaries you'll will get the general gist how this film comes across, and if you liked them then you will probably like this.

Oh and you'll also come away feeling that a follow up is probably on the way.

On the whole, worth at least one look.

Having read the original Cassandra Clare novels I found myself swinging from one side of the fence to the other upon the announcement of the film version of the story of Clary Fray, a red headed New Yorker who discovers the secret and mystical world of her mother’s people, Shadowhunters, those tasked with protecting humanity from the demons that roam the earth.

At first I was ecstatic and with the release of each casting choice only further enthused, however as the adverts and trailers began to appear on television I began wondering where the story of a teenage girls search for an individual identity had hidden itself in what looked to be a series of special effects laden battles.

Having watched the film I have fallen somewhere in the middle, impaled myself upon the rather non-committal verdict that it was “alright”.

The film has the problems of any adaptation and as a purist I can not help but stigmatize any cinematic imagining of a personally loved novel, but the Mortal Instruments: City of Bones does the best it can with the limitations of time, acting, production that any film faces against the wonders of the human imagination. Where some viewers found themselves on the edges of their seats, fascinated by the lore – or Law for true fans – inherent in the story and impressed by the envisagement of friendly warlocks and Greater Demons, for one who knew every twist and turn from the much worn pages of her paperback, the direction seemed haphazard, the acting cack-handed and the script infantile.

Yet I was not bored, the action and fantasy adventure aspects of the story were entertaining enough to carry the film for its relatively short 98 minutes, whilst the characters are reasonably well honed and reminiscent of those who inhabit the novels.

Leaving the theatre however, I did not find myself hankering for the next chapter, where only last year I had found myself rushing to the nearest bookshop to purchase City of Ashes. Though the next film is scheduled for release next year this reviewer won’t be putting it on her must see list.