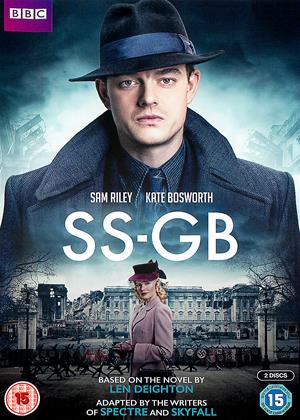 Len Deighton, best known for creating the very un-Bond-like secret agent Harry Palmer portrayed on screen by Michael Caine, wrote his "What if Hitler had won?" novel at a time when the concept hadn't been done to death yet, so he didn't have to use outrageous gimmicks to make his book different from all the others. Therefore this TV adaptation features no Nazi flying saucers on the Moon.

What it does feature is an astonishingly meticulous recreation of wartime Britain with added swastikas, and a largely character-driven plot in which figuring out who the good guys are isn't quite as easy as you'd think under the circumstances. In a few scenes the use of CGI is rather too obvious, but otherwise the BBC do a remarkable job of portraying dingy, ravaged London on a budget that would just make Hollywood snigger contemptuously. Also, in contrast to Hollywood in general and Disney in particular's over-the-top political correctness, everyone smokes so much that in the one scene where an adult is shown to be a non-smoker, you'll think "Plot point!", and you'll be right. Though I was puzzled by how seldom the Nazis did the Nazi salute or said "Heil Hitler", as if the BBC thought these two things were somehow more offensive than all the other Nazi imagery we're constantly shown.

Where it falls down a bit is the contrived plot, which involves at least one absurdly enormous coincidence. The not particularly long source novel doesn't really contain five hours' worth of material, hence the blatant attempt to turn the latter half of the story into "Tinker, Tailor, Soldier, Hitler", with characters we've seen very little of turning out to have fiendishly complex cunning plans that are hastily explained at the end, and a peculiar subplot involving King George VI, who is portrayed as such a physical wreck that they don't bother telling us what's supposed to be wrong with him because if you've got a real illness that bad you're obviously going to die almost immediately. Also watch how, right at the start, our hero finds an object he can't identify at a murder scene and conceals that one bit of evidence for no reason at all, as if he magically knows that later on it'll be very important. And it's a howling example of bad historical research to assume that in 1941 everybody knew what an atom bomb was!

I also had a bit of a problem with Sam Riley's acting. Look at that picture up there. That's his facial expression for 99% of his screen time. He's so emotionless that two hours in, a Nazi makes a joke about it. I know these are hard times and he's having a particularly hard time himself, but his relentless repressed misery is actually depressing to watch, to the point where I found myself wishing for more scenes with the Nazis because they're more fun to be around. It's true that not all of the Nazis are completely bad, but when the hero is in any way less appealing than the SS, something has clearly gone wrong.

Brilliant TV 5-parter on UK under Nazis in 1941 from the director of Generation War. - SS-GB review by PV

I watched this when it was on TV, but rewatched it again after reading the excellent Len Deighton novel. I enjoyed it better the second time when I watched it more closely - this drama demands that. It is no action movie.

The atmosphere, decor and design of London in 1941 after the Nazi invasion of 1940 is expertly and exquisitely done, as it is in the novel - the Nazis had detailed plans for what they would do after invading Britain, so the novelist based his London and UK on that.

It's a clever and intricate plot, for of double bluffs and slippery characters - the German actors playing SS chief Kellerman and senior SS officer Huth are superb and spot-on. The character arcs make sense and are tight.

The ending was changed from that in the novel as so often happens in films. Also, our pc age demands main female characters in the middle of the action with agency, so one survives to do that - in the TV drama., The novel is different there., But be grateful for small mercies - they could have done colourblind casting! No doubt in 2021 they would. Absurd.

Watch with the FATHERLAND TV movie maybe (or read the classic novel) and also GENERATION WAR by the same director which is real history fictionalised, not an alternative history, a real history .

Then there is the 1942 British film WENT THE DAY WELL, the first example of an imagined Nazi takeover of Britain, There have been many more 'alternative histories' with the Nazis winning the war - the US-set The Man in the High Castle written 1961 on Netflix recently. The 1964 film IT HAPPENED HERE Is low-budget student film but good nonetheless. Other WHAT IF films include the recent TV series tHE PLOT AGAINST AMERICA.

Some reviews criticise the expressionless main actor - I do not. He has to hide his feelings to negotiate a role as a British policeman in Nazi London, suspected by both dies, so that acting is perfect as is that of others - though the character of Harry Woods is way too old here really - he is younger in the book, fat and mid-late 40s maybe. Not 70 as James Cosmo., Coppers retire aged 50, remember. Miscast there maybe.

Fascinating and watchable - but attention needed by the audience to understand the plot.

SS-GB is a well-made atmospheric thriller with exceedingly British neo-noir elements that ultimately push this offering to be more dark and gritty that it needs to be. Which brings me to my second point: a thriller should be dark and gritty by default, which disproves my first point (plus the fact that genre and tonal choices are very much non-debatable since they’re mostly a subjective matter). And so, is this mini-series worth your time? Well, that ultimately on you to decide, and on me to nudge you in the right direction. Now, the review.

One of the main differences between British and American shows is that the former (mat least most of the time) don’t try to spoon-feed you with pointless exposition and dialogue instead of giving you the power to deduct the plot and motivation of the characters. This is the main argument why some viewers may find SS-GB slow, boring, confusing, and anything but interesting. Where in reality, SS-GB is everything BUT those adjectives; it’s is easily one of the most intelligent shows out there and if you don’t agree I’ll battle you in a duel.

Lame gags aside, SS-GB offers a little bit of everything for everyone: there are the quintessential bad guys the Nazis, but there is also an underlying enemy that looms over the protagonist whilst presenting what’s basically an unseen threat, but ever-present threat. Then, there are the multiple romantic choices to raise tension and keep you on the edge of your seat (or armchair); but most importantly, the series has this weirdly indescribable but satisfying feeling to it, like when you sit near the crackling fireplace whilst a blizzard roams outside your room. You’re not really in danger (at least not yet), so you feel both elated and ready to tackle any upcoming challenges all at once. This is exactly how I felt whilst enjoying SS-GB one episode after another.

And perhaps the best thing about this series is the filmmakers’ dedication to the sets, the visual and tonal style, sounds, and everything that builds a perfectly neo-noir atmosphere to indulge in. It’s just, SS-GB is stylish and it doesn’t try to hide that fact in the least; here, inevitably, one cannot but compare SS-GB with The Man in The High Castle: whilst tonally very similar, where the former leaves much to be desired and deciphered on the ground of the deductive logic of its viewers, the latter is full with exposition and shoves unnecessary information more than it needs to. Arguably, this is one of the main reasons why I found myself enjoying more whilst watching SS-GB than The Man in The High Castle. Either way, both of them are aimed towards different types of audiences and as such, I respect them these two series for what they are.

Finally, is SS-GB worth your time? Well, of course.