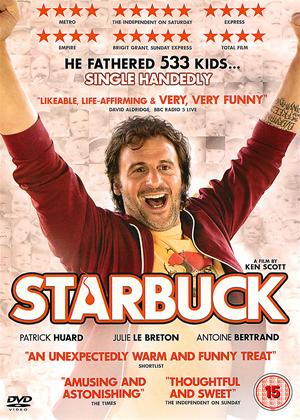 This bizarre French-Canadian story of a man whose excessive donations to a local sperm bank have landed him with the alias “Starbuck” (after an infamous studding bull), and whose subsequent children come searching for him after twenty years has already been picked up to be remade for American audiences with Vince Vaughan, and although the original French language film lacks the comedy it’s premise promises one can’t help but be apprehensive about the upcoming remake.

David Wozniak, 42 year old, middle son of a butcher whose life seems turned upside down when his policewoman girlfriend announces she’s pregnant and plans to raise the baby alone, has been a slacker all his life; yet this is not the typical tale of a man’s journey from adulthood to real maturity – the second shock awaiting Wozniak in the narrative puts a refreshingly original spin on what is fast becoming a dull comedic stereotype.

Wozniak, played well by a shaggy haired Patrick Huard, is a fairly likeable character, despite his clear lack of personal responsibility, and his encounters with 142 of his 533 unknown children are rife with comedy potential, however it is his lawyer friend and legal advisor Avocat (Antonie Bertrand) who steals the scene every time he’s on screen, his musings on the absurdity of Wozniak’s situation providing the movie’s few real laugh out loud moments.

Despite the missed opportunities for comedy however Starbuck is a charming movie, the characters all sweet and well portrayed whilst the storyline is both original and enjoyable, all of these work in the film’s favour as it’s runtime of 106 minutes goes on a little longer than is really sustainable; but unless you’re particularly impatient you’ll probably make it through and be pleased you did.