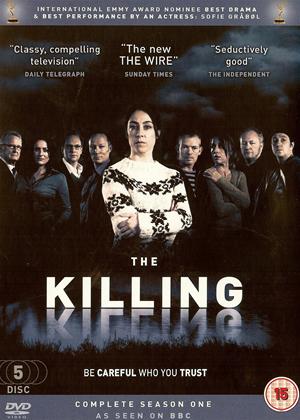 The American's clearly thought it was good because, like girl with the dragon tattoo and insomnia they were not slow to do a copy. I have not seen the copy, it would do well to be as good, the acting in this is paralysingly good. It is a multi-drama very similar to Borgan which I would also recommend. There are about 10 plots all of which are good and all are played enough to maintain tension and emotion without confusion. The plot is therefore so complicated I will not summarise but it is not difficult to follow.

It's very long and it's in Danish with subtitles - but please don't let that put you off. This is an enthralling police / political drama that will have you mystified (by the twists and turns of the story) and impressed (by the sheer quality of the acting).

There are 20 (yes, 20!) episodes of around 55 minutes each. Each episode covers one day in the hunt for the killer of a young girl. But this isn't a simple cop drama - the murder takes place against the background of mayoral elections for the city of Copenhagen and the leading challenger for office and his staff appear to be deeply involved. Are they? Or is this yet another of the many red herrings and false trails that are laid to keep you waiting in suspense for the next episode.

The story goes like this: a 19 year old student is found raped and murdered. Suspicion falls on her fellow students, her teacher, the driver of the car she was found in, her family, local politicians, her father's employees, a taxi driver. DCI Sarah Lund investigates and becomes obsessed with finding out whodunnit, at the expense of her own family and her career.

The length of the series allows a depth of characterisation that is rare in TV dramas and the quality of the acting is very good indeed. The depiction of the grief of the victim's family is almost tangible.

I recently watched series 1 of 'Borgen', the Danish TV political drama. 'The Killing' also includes Danish politics, but this time in local government rather than parliament and while 'Borgen' is about political machination at least the politicians have fairly clean hands. Here the involvement is much darker and more corrupt.

My taste and that of my wife are quite different - but for once we found something we both really enjoyed. We watched 'The Killing' for hours day and night until we had consumed it all. Great stuff. If I have a criticism it is that the ending - while in hindsight inevitable - left quite a few loose ends unanswered and details unaccounted for. So, episode 20 slightly weaker than the others, but the first 19 are cracking!

[Aside 1: Apparently the Danish title 'Forbrydelsen' translates better as 'The Crime' - and this series is about far more than a simple killing]

[Aside 2: The subtitles vary in quality and at times lapse into American rather than English - but that's a minor point]