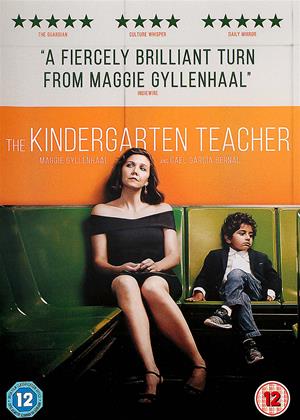 Reviews (3) of The Kindergarten Teacher

There is a mantra I live by, if Maggie Gyllenhaal is in something watch it. Even a baked-bean advert. You'll see a great performance even if the product is not good.

Kindergarten Teacher is a very interesting film, it can literally be seen as a 'slow burner' as we are treated to Lisa's life both work and family and there is little that is remarkable about it with all the actors giving fantastic naturalist performances. So, if you are looking for intriguing action or drama from the get-go you really need to have a modicum of patience.

Eventually Lisa crosses paths with Jimmy a strange five-year-old in her class, wonderfully played by Parker Sevak as good as a young child can play a role, and here we start into a rabbit hole that Lisa should have avoided but due to her life just could not.

Your view as to what type of film Kindergarten Teacher really depends on the viewer, obviously this is true to an extent of any film, but in general you know a film is a horror, comedy or war film usually. But Kindergarten Teacher can sit comfortably in several camps. It is definitely a psychological drama, is it a horror-drama? Only you can decide and for me it shows tremendously skilled writing, directing and acting that leaves you questioning as the final scene closes. What did you just watch? How do you feel about it? That final line, for me Lisa was correct, her actions not so much but she was correct. That's all I can say because if you do watch this film and like it any more will ruin it.

For me there a lot of horror and thriller films that fall far short of the potential scares that this film produces with great subtlety and with all the scenery left unchewed and intact. A typical understated Gyllenhaal performance seems to have permeated throughout the film and it is all the better for it - although I am being disingenuous director Sara Colangelo clearly believes less is more - it looks as if she is correct.

After watching I found out this is a remake of a 2014 film of the same name, it would be interesting to see if this is the better film.

Kindergarten Teacher is a film that will make you feel uneasy the longer it goes on and will make you think about what you have just witnessed long after the final credits have ended. This film will 'get to you' I recommend giving it a go.

Not run of the mill. - The Kindergarten Teacher review by BE

Quite beguiling to begin with, then I started to worry where this film was going.  I’ll say no more.....  Lovely performances from Maggie Gyllenhaal and the unpretentious little boy. Holds the attention throughout.