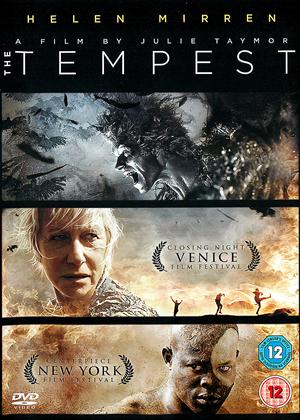 Reviews (2) of The Tempest

Marmite - The Tempest review by JD

On one day you could watch this film and think "Shakespeare, I wish there was a translation and it doesn't really do well on film" and on another you could be transported to an abstract and arty dream-like state and be swept along in a modern vision of a ancient story. If you are not receptive to some fairly heavy duty Shakespearian English and magic don't get it.

Helen Mirren makes a totally believable female Prospero in this adaptation of Shakespeare's well-known play. She is ably supported by a fine cast, memorably including Russel Brand as Trinculo. Visually it's imaginative and beautiful, although sometimes the effects are distracting. My only quibble is that Taymor has tried to improve on Shakespeare by rearranging the order of some of the scenes and speeches, a step too far in my opinion. Generally lively and entertaining, worth watching.

William Shakespeare’s ‘The Tempest’ is a play that is both fantastical and simplistic with its tale. In an unknown, remote, and barren island, a woman named Prospera has become the queen-sorceress with a library of magic for reference and a staff that wields unimaginable power. There she lives with her only daughter Miranda, a native servant named Caliban, and the sprite Ariel, who does her bidding to earn his freedom.

When a ship filled with nobles who have stolen Prospera’s royal duties are nearby, in her utmost rage she unleashes a tempest – an angry storm that shipwrecks the vessel and forces its passengers to arrive at her shore. From there, the supernatural scheming and vengeance begin and in this adapted-to-the-screen version written and directed by the theater’s Julie Taymor, expect nothing less short of effortless.

Unfortunately, Julie Taymor doesn’t exactly know how to tone it down for the cinema. Her past films have always been spectacular in the execution. You may even want to call it hallucinatory at best but it also becomes too theatrical for anyone’s good. One of the great techniques to use in cinema is subtlety – this is what Taymor doesn’t subscribe to.

Over all, her version of ‘The Tempest’ manages to make a great reinvention – that of making the lead character, a male Prospero into a heroine. Casting Helen Mirren gives the now Prospera more depth and the dynamic between her and daughter Miranda (Felicity Jones) more complex. The other cast member who did much of the heavy lifting is Ben Whishaw as the almost-naked sprite Ariel. If not for him and Mirren, ‘The Tempest’ would have been lost. It’s a fine attempt with little spark that doesn’t go all hot at all.

The saving grace would have been the courage to do ‘The Tempest’. Shakespeare isn’t an easy feat but at least Taymor and company tried. Here’s a pat on the back.