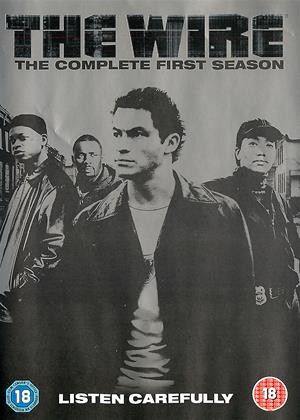 I could join in the chorus of approval hovering over this US crime series with all the usual stuff about how hard-hitting, powerful and compelling it is, but we've all read those sort of reviews for films/tv a million times before. It's almost as if critics long ago agreed on a bland lingo to use and us lot follow suit. If I like this, then assume there's nothing wrong with the acting/music/photography/sound/direction/mis en scene/etc etc blah

Instead, I'll keep it simple. This series works like a good book. For me it started slowly and thoughtfully, slightly dull even, and then during episode three I suddenly realised I was hooked. The main reason is The Wire is all about one story, one plot. A bit like Murder One if you remember that, but better I think. The characters emerge slowly out of the action, and as they do, you care more and more.

I would recommend this to any Sopranos/24/West Wing type fan as it matches America's, and HBO'S in particular, recent quality. But I would also suggest the dvds to someone who would normally go for a more literary film, or someone who's into Austen TV dramas. It has the same in-depth feel as a novel and you will remember it fondly afterwards.

The best ever? - The Wire: Series 1 review by CP Customer

It's quite amazing that this series was neither nominated for nor received any Emmys. It takes a while to get going & I would strongly recommend watching the first few episodes twice as there are numerous characters to get to grips with & no "stars" to immediately allow one to put face to name. It's totally uncompromising & assumes- unusual for many TV series that its audience isn't just interested in mindless entertainent. For anyone vaguely interested in police drama it's a must.

Started watching this because of the rave reviews from critics and here, but I just don't get it.

The dialogue in the first episode is so bad it's funny, like a piss-take of a TV police drama. Every one of the short, shouted sentences includes some or all of shit, fuck, piss, ass and nigger. Don't think I've led a sheltered life. My wife went to high school in Lexington. As a foreigner, most of her friends at the time were black girls, despite the apartheid in the school corridors. And there were guns and knives. I concede the depiction of the 'projects' may be realistic. The word 'realistic' is used in the rave reviews. But the police?

Every cop is like a mad dog, barking at all the other mad dogs in the office.. Everyone shouts, no-one listens, no-one forms sentences worth listening to. I've worked for an American company, anyone even talking like that would be on a warning straight away. It cannot be realistic. That level of aggression is not sustainable.

I don't mind the unrelenting bleakness, the urban winter setting, devoid of green. That works in The Bridge because the characters are human. The French series Engrenages (or Spiral) also, but the characters are interesting and believable. But this?

After the first episode I wanted it to stop. But then I read the reviews again and watched a couple more, then decided, as absolutely anyone would say in this series 'fuck this shit, nigger'.