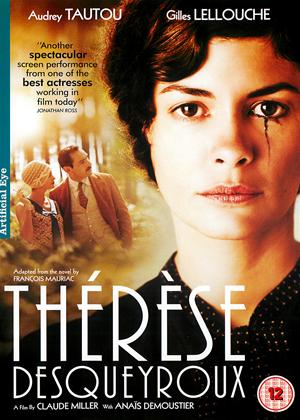 I was completely dissatisfied with the sub-titles. they didn't match the french in as much as not enough french was translated so it was impossible to follow what was going on and I had to give up. very disappointing.

The script is very Victorian. Emily Bronte seeps from it. A messed up but strong headed Aspergic woman marries a man for his wealth. She is totally unemotional though it is some surprise when she betrays her childhood friend. The way her marriage unfolds is beyond objectively dispassionate. If you were hoping to see Audrey Tautou fascinate and delight you are in for a grave disappointment. If you want a film with 1870's values and lovely photography this is for you.

Is this a good film? Yes, it is. But some resilience is necessary to see it through. The attention to period detail is without fault and there are the lovely lingering visuals that we expect in continental films. The movie's storyline, whilst valid, is very suffocating as we, the viewers, are dragged into the lives of high-bourgeois families and their almost medieval social behaviours. We are introduced to the central character Therese and her lifelong friend Anne and it is soon apparent that Therese is a cerebral type whilst Anne is very 'earthy'. To fulfil social expectations, Therese enters into a joyless marriage with Anne's self-obsessed brother and Anne herself sets off on a secret relationship with the local young intellectual, who is definitely not acceptable to the 'families'. Therese is given the job to persuade the young man to give up on Anne, but she herself is attracted to the young man, but more as an intellectual outlet for her thoughts and emotions. Nevertheless, it is a betrayal of her friend. From now on Therese's token marriage disintegrates. The treatment of both Anne and Therese by their families is a mixture of banishment and imprisonment (the rather strange family servants take on the role of wardens). There are several scenes of opening windows and closing doors. In comparison, Chekov plays carry more passion and hope for their characters! Throughout the film I was hoping for some form of redemption for the character of Therese, but Tautou's performance is dour and I found it difficult to sympathise or empathise with her the character's predicament. She smiles a couple of times in a somewhat bizarre manner. Is the movie worth watching? Yes, but perhaps not a great French movie. Words of warning: the movie should carry a caution; 'smoking can seriously damage your health' and also in the movie, wild animals do not fare well.

A wonderfully simple yet beautiful movie Therese Desqueyroux tells the story of a young woman living in rural France in the early part of the 20th Century where feminism is a far flung concept. Therese, played by the ever engaging and utterly captivating Audrey Tatou is a woman trapped in a marriage of convenience, unable to express herself or even vocalize the myriad of unorthodox and creative thoughts and ideas that swirl around in her head.

Her husband Bernard, the man chosen for her by her family, is a rich, strict Catholic whose life is anchored in the traditional and bourgeois; where his wife, pale, delicate and beautiful in herself, seeks freedom of expression he stands at the other end of the spectrum, immovable as a mountain.

When Therese discovers that increasing her husbands medication causes him to become ill and bed ridden she is torn between her morals and her desires; her longing for experience and passion are set against her ethics and as viewers were are forced to wonder which aspect of this most signifies her humanity?

I daren’t tell you any more about this lovely piece of French cinema, other than that some of views and scenes, particularly those that take place in pine forests owned by Bernard and his family, are utterly exquisite.