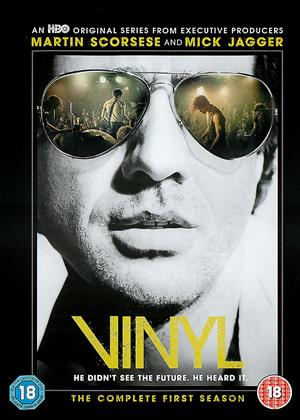 Doesn't quite make it - Vinyl: Series 1 review by RD

This film should be great - I'm a big fan of Martin Scorsese and the music of the seventies, so there's a lot of promise for this film.

Let's start with the soundtrack, it's great and the original tracks have been tinkered with to sound huge. But that's about all that works. The screenplay and plot are so thin you could read the paper through them, and then the scenes are cut up and mixed round in a random order that it's difficult to tell which scene happened before which, and the poor scrap of a plot is then ripped to shreds with the constant time-shifting.

There is no interesting dialogue, it's all just very basic and not much in the way of humour either, so the actors haven't much to work with and none of them shine out as characters.

Camera work is "ok" if a little jerky, possibly for realism, but take care when the Otis Redding track starts as the camera is looking past the singer directly into a powerful white spotlight, and as the singer rocks back and forth gives an intense slow flashing strobe effect that is quite painful to endure. We're not epileptic but still had to shield our eyes.

We both lasted out to the end of the first episode, but really didn't want to carry on with any more as the story hadn't developed at all and didn't promise anything different for the other episodes.

What a contrast to "Mean Streets"!