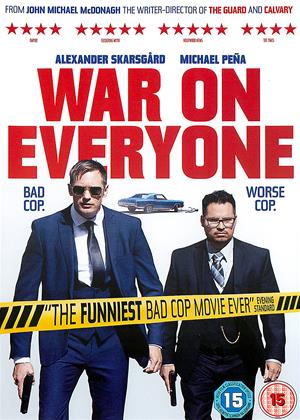 Reviews (1) of War on Everyone

Pena saves a 1 star - War on Everyone review by NC

Pena can be quite funny, in a Mexican/Cuban/fast-talking way, and does bring a touch of lightness into a tale of two cops who are more violent than the opposition.

Hopefully, in real life, America is not quite as bad as this?

War on Everyone review by Adrijan Arsovski - Cinema Paradiso

A highly stylized black comedy featuring comedic go-to bloke Michael Peña and a civilized Tarzan in the form of Alexander Skarsgård - War on Everyone by director John Michael McDonagh (Calvary, The Guard) is a total annihilation of conventions and a direct attack on the PC culture, that uses over-the-top bits and employs radical film tricks to produce a meta-carnival against both the senses and the ongoing film industry.

The film welcomes Terry Monroe (played by Alexander Skarsgård) and Bob Bolaño (Michael Peña) and pairs them together into an unlikely cop duo that proves to be more than what initially meets the eye. These two, let’s say ‘dishonest’ police officers, tag along and roam the streets of New Mexico in a demeaning manner that puts fear in their enemies’ hearts. Of course, the enemies they (often) face against are nothing more than a bunch of low-key criminals who happen to run out of luck the day they met Terry and Bob.

Skarsgård’s Terry is the brute of the two – punching and shoving his way out of conflict to a solution, and the is drunk most of the time; on the other side of the rainbow is Michael Peña and his Bob – a witty smartass who isn’t afraid to channel his inner philosophies in the face of immediate danger, or absolute defeat if you will. The interactions between the two of them are highly entertaining and prove that Pena and Alexander have great chemistry when playing characters with opposing traits but same if not identical cravings.

Then we have the archetype of the wise old man, who happens to be Terry and Bob’s superior officer (Paul Reiser) and who often leads them in and out of danger, as he himself doesn’t know how to handle such loose specimens and ends up giving up altogether.

Meanwhile, the unlikely rag-tag duo continue to wreak havoc via their 1970 Chevrolet Monte Carlo vessel, a wagon built of seemingly magical materials as it’s almost impervious to damage. This ‘work ethic’ leads them to their antagonist under disguise, who, you guessed it – is a high-rolling Brit called Lord James Mangan (Theo James), and who stops at nothing to see his crime plans executed to perfection.

War on Everyone may feel anarchic: even disorganized at times, but no worries since this would prove to be director John Michael McDonagh’s grand scheme of force over-the-top characters to do his bidding without anyone getting hurt in real life.

The music is nothing extraordinary, and cinematography is on-par with recent British classics such as the infamously dark Utopia, or the always cheerful Swallows and Amazons.

Finally, War on Everyone is hilarious, bizarre, surreal and it even includes a scene set in the vast nothingness that is Iceland.

A black comedy for the ages, and probably an instant cult-classis too.