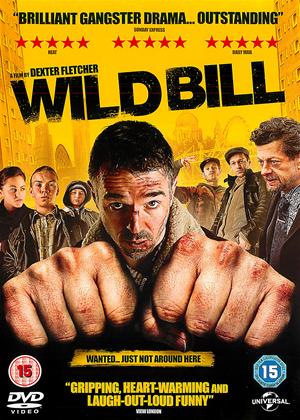 From the trailer and some of the publicity you might get the impression that this is yet another East End gangster film. But you'd be wrong.

Yet it's really quite a gentle film at heart, despite a certain grittiness. The story goes like this: 'Wild' Bill Hayward returns home from Parkhurst on the Isle of Wight where he's done an 8 stretch for GBH. He finds his boys, aged 16 and 8, living alone in some squalor having been abandoned by their mother. His probation officer forces him to get a job and become more responsible or the children will be taken into care. He does get a job of sorts, avoiding the temptation of easy money dealing drugs, and impresses the local social workers. His eldest son has a job on a construction site, but the younger son is tempted by the money on offer from the local bad boys, and becomes involved in the drug trade. 'Wild' Bill builds a relationship with both sons - not an easy task, given that he's been gone for most of their lives - and sorts out the local baddies at the end.

It's a low budget film but it really does work well, and I enjoyed it very much. Yes, there's plenty of f-ing and blinding, but that seems par for the course these days, but there's a rich seam of humour as well. I was most impressed with Will Poulter who plays 16-year-old Dean - he was also excellent in the recent 'Son of Rambow' which I can also recommend. 'Wild Bill' is worth 4/5 stars from me - highly recommended.

One of the best in years - Wild Bill review by SM

Seen this at the cinema a few years ago and watched it again yesterday. Really really enjoyed the movie turkey great acting, directing and story line which both has good drama, comedy and some gangster action. Well worth a watch. Highly recommended.