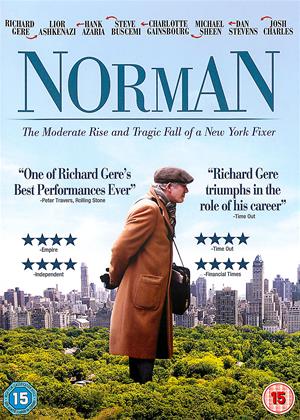 It was hard to know what to make of this film. The plot was obviously going only one direction. Richard Gere worked hard to perform a character that repeated the same gestures and movement.

I thought there might be more to this, but there wasn't!

No wonder it only lasted a week at the cinema

. Teious, boring and meandering and Richard Gere was not on form or may be it was the script.

didn't like it at all - Norman review by CP

didn't like it at all and didn't bother to see to the end. 30 mins was enough. if I could give minus point I would...boring.

Really surprised by this film. Richard Gere is usually in better films. I absolutely hated this film. Boring, silly, confusing. Do not waste your time watching it...

If, like me, you have a serious difficulty in falling asleep - watch this. I can't think of a better cure for insomnia. The film is also an excellent choice for those who want to invite relatives round for an evening - those relatives who you really can't stand; family who you would be genuinely pleased to see that they truly had nothing at all in common with you, and perhaps as a result - stay away.

I really thought that this was one of those those French film scripts that Gere has plundered in the past to show off his 'intellectual credentials', it would have been no surprise to see that it originated as an art house offering, so dire and excruciating was its presentation. At best it was a really good example of the balance between what is exceptionally good currently, and what is extraordinarily bad. It is also an excellent film to expose completely pretentious wankers who gush about such tripe as if it was high art, to which only they are able to decipher and comment knowingly upon, before pontificating about to us proles. I should have know that when the silly graphics appear with stars all over the text, that what this really means is that it is going be complete tosh.

Stick with it...it's worth it - Norman review by TR

This is meant to be slow-paced, so don't knock it for that. Also, what's wrong with Richard Gere's performance? He's never given a bad one, and here I thought he brilliantly showed this guy's descent into hopelessness. Very true to life, especially in the sense of being used by others for their own ends.

Nearly but not quite a good film. The problem is the central character, Norman, who is one of those people that exist by networking and telling lies to get into higher levels of society and hopefully earn a living by putting others in touch who can make deals giving him a cut. Charming and a little mischievous, he exists in a cloud of vagueness and nobody really knows what he does. As a central character this vagueness makes for a difficult plot, and as a result the poor audience are often left wondering what on earth he is doing and where it's all going.

The first half is slow and meanders along, he befriends an Israeli politician and that's about all. The politician becomes Prime Minister after three years and then remembers Norman (hooray), and the plot then starts to develop as the politician is embroiled in a corruption scandal which then becomes the climax of the film. Big problem, this scandal is glossed over and like the early part of the film, the audience is lef feeling like it's being kept out of the story instead of being involved. That's the whole climax we've been waiting for throughout all the film which is then hidden and screwed up. A real disappointement.

The acting however, is good all round and Richard Gere makes a good Norman. The editing is good, and the dialogue is intelligent and well written with some excellent Jewish characters, and the photography is good so we nearly have a good film, but giving the audience such a skimpy plot and hiding so much involvement especially right at the end stops any real enjoyment.

As an analogy, you know the first glass of sparkling wine that is poured when you open a bottle? It's full of foam and looks like a drink but is actually completely foam and bubbles with no actual drink under it all? Well that's this film.

Don't remember choosing this film but apparently I did but not sure why. Stopped it after half an hour, couldn't pick up thread at all and Richard Gere was not believable, couldn't understand story or what it was trying to tell.

Very slow, meandering script and hard to get into this film, watched half an hour and turned it off. Not my sort of entertainment to be honest

and better stuff on the tv. Disappointed as like actor Richard Gere, not his best film in my opinion.