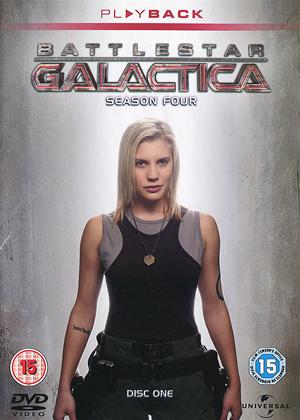 Still ahead of the pack - Battlestar Galactica: Series 4 review by CP Customer

Season four would for many other television shows represent an opportunity to play it safe and tread water but not Battlestar Galatica. Revelations, twists and dramatic exits continue as the show propels itself towards the final series. The end result is a show that matches anything on television in recent times. The first disc of this set is the special episode Razor, which was also released as a standalone DVD.

Series 4 of Battlestar Galactica opened strong considering the huge cliffhangers Series 3 left off on. I know that pretty much goes for every season finale for the show but Series 3 marked the biggest revelations of the show. We learn about four more Cylons in the Fleet who become self-aware of their nature. We learn about the existence of the next Caprica isn’t just a legend but a real planet just waiting for the Colonial Fleet to arrive. And Kara, who we previously thought was dead when consumed by a storm, shows up out of the blue. So many questions swirl and Series 4 at least keeps that mystery going as audiences eagerly awaited the reveal of the fifth and final Cylon.

Suspicions arise quite quickly, where Starbuck is thought to be a Cylon for her sudden return after her demise. She’s not, obviously, since the mystery can keep going, making Starbuck more or less an unfortunate red herring. Distrust brews amid the fleet, to the point where allies find themselves distracted by the Cylon threat and holding each other at gunpoint. Resources start running low and desperation makes times tougher even without the Cylons attacking, which they still are.

The Cylons, however, are also finding descent among their ranks as problems arise with trust and ideals. The bickering leads to the Cylons becoming ever more desperate to bargain for their own when intense hostage situations come about for control. Tensions bubble when the Galactica and a Basestar face off against each other with itchy trigger fingers on both sides. What makes these situations all the more powerful is that the secretive Cylons among the fleet have to decide whether or not they want to reveal themselves for the sake of security or to save others.

As for the other characters, they react differently to the shifting situation. Gaius Baltar shifts towards the religious by better embracing his preachings that continue to draw crowds. Injured Cylons come asking for help from the fleet, leading to the appropriately titled episode Guess What's Coming to Dinner?. Ghosts of the past continue to haunt the fleet, Cylon or not. And for those who really want some action out of BSG, the assault episode of The Hub features the fleet taking the battle to the Cylons in a major way as they assault one of the key bases for Cylon regeneration.

The performances all around are especially powerful this season considering how many balls are in play. Aside from the conflicted nature of the four revealed Cylons, there’s also the developing nature of the relationship between Adama and Roslin, the unease of Kara not knowing her purpose, the suspicions of Lee, and the bitterness of the opposing Cylons.

Series 4 also ends one of the most downers of finales where hope is more diminished than given. The fleet feels triumphant that they finally have a location for the Earth that was said to be their new home. They set in the coordinates and jump to the locations, ecstatic to find the planet they’ve spent years searching for. Then they get down to the planet and...it’s dead. No life. No resources. Radioactive. A barren wasteland. Where do they go now? BSG leaves this aspect of the finale wide open so there’s little clue what will happen next.