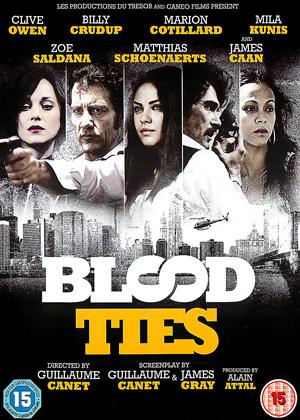 Synopsis:
New York, 1974. Fifty-year-old Chris (Clive Owen) has just been released on good behavior, several years after he was involved in a gangland murder. Waiting for him reluctantly outside the prison gates is his younger brother, Frank (Billy Crudup), a cop with a bright future. Hoping that Chris has changed, Frank is willing to give his brother a chance; he shares his home, finds him a job, and helps him reconnect with his children and his ex-wife (Marion Cotillard). But Chris' past quickly begins to catch up with him, and his descent back into a life of crime becomes inevitable. For Frank, it's the last in a long line of betrayals, and he banishes him from his life.
But it's already too late; the brothers' destiny will be bounded, forever. Blood ties are the ones that bind.
Actors:
Clive Owen, Marion Cotillard, Billy Crudup, Mila Kunis, Zoe Saldana, Matthias Schoenaerts, James Caan, Noah Emmerich, Lili Taylor, Domenick Lombardozzi, John Ventimiglia, Griffin Dunne, Jamie Hector, Yul Vazquez, Eve Hewson, Anais Lee, Mirabelle Lee, Richard Petrocelli, Mark Mahoney, Vincent Lamberti
Directors:
Guillaume Canet
Producers:
Alain Attal, Guillaume Canet, John Lesher, Hugo Sélignac, Christopher Woodrow
Writers:
Guillaume Canet, James Gray
Studio:
Lionsgate Films
Genres:
Drama, Thrillers
Countries:
France, Drama, Thrillers

Brothers on opposite sides of the law. One’s a cop, the other’s a thug. Wow, that’s an original concept. Why did no-one think of it before? Even worse, it’s directed so ploddingly it’s sleep-inducing. A real disappointment from director Guillaume Canet.

The Making Of feature on the DVD is more interesting. Guillaume seems to have found making his first American film difficult, which perhaps explains its lack of oomph. If you haven’t seen his brilliant Tell No One, watch that instead.

Film adaptations of novels are not known for being well received by audiences, and remakes are even less successful, rarely worth the cost of the cinema ticket. Blood Ties suffers both of these. It is a French-American crime thriller, directed by Guillaume Canet, but even its talented cast cannot compensate for the shortfalls.

The story takes place in 1974, when Chris Pierzynski (played by Clive Owen) is released from prison. He has been serving nine years for murder, and is ready to turn his life around. But despite his good intentions and new relationship with Natalie (Mila Kunis - who would have thought she would be the one from That 70’s Show that would make it big?), the lures of old habits overcome him, and he returns to his criminal ways. If that was not bad enough, his brother Frank (Billy Crudup, who also stars in the amazing upcoming film Rudderless) is a New York cop. The conflict between the brothers tears are their sister Marie (Lili Taylor), and their sick father Leon (James Caan), who just want the two to get along. It is not until Frank is arresting a man named Anthony Scarfo (Matthias Schoenaerts) that he is re-united with his ex-girlfriend Vanessa (Zoe Saldana), who is currently married to Anthony and have a daughter together. Of course, Vanessa now wants to get a divorce, and she and Frank rekindle their relationship, much to the ire of Anthony. Anthony tries to kill Frank, and it is up to Chris to protect his brother, at whatever the cost.

If it wasn’t for the talented cast, this movie would be a complete write-off. The story seems simple enough, and something seen in films many times, but it is how the actors make us feel for these particular characters that keep you watching. The essence of New York in the 70s is done well, with costume, scenery and minute details doing a lot more than other era-specific films have done.

Despite interesting set-ups and moments when all aspects of production work in harmony, the film becomes stagnant. The two-hour running time shows the lack of character development, except for the two lead characters. While this development is obviously important, you lose the reality of the film, and see how everything happens just for Chris and Frank’s progress. If you’re not the type to read into films too much, than this might not be an issue for you. The film will certainly entertain many viewers, but isn’t award-worthy.

Blood Ties has received mixed reviews, most rating it around 50 out of 100. Use of violence, swearing, sexual conduct and drug use will restrict its audience, and is a surprising job choice for some of the cast. The film reportedly had a production cost of $25,500,000, an astounding sum of money and all the more reason to be disappointed in the finished product. As with every film, every viewer is different, but for me, even the vast amount of swearing in the trailer was enough.