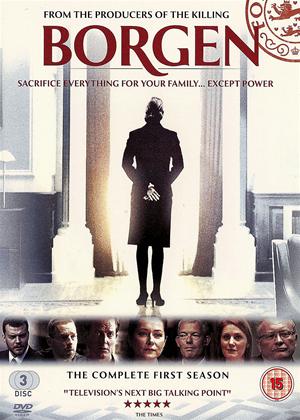 If you're OK with subtitles this is well worth the effort. The acting is so much better than any British serial drama, the plot unfolds at a nice steady pace and is definitely not guessable. The photography is great. I'm completely hooked and will book the whole series.

Highly recommended - watch it even if you don't like politics - Borgen: Series 1 review by RP

It's in Danish, with subtitles, it's about the politics of a foreign country and it's lengthy with 10 x 45 min episodes. But please don't let that put you off - this TV series really is excellent.

Each episode is essentially self-contained but the same major characters appear consistently throughout and this gives time for some in-depth development of the characters - this is significantly different from most British TV, where character development and background information is usually sketchy at best.

'Borgen' (= castle) is the nickname for Christiansborg Palace, the seat of the Danish Parliament. The main storyline follows the election and time in office of Brigitte Nyborg (really well played by Sidse Babett Knudsen), the leader of the Moderate Party who unexpectedly becomes Prime Minister after the formation of a coalition government.

The series shows her development from a perhaps naive, idealistic, inexperienced politician through to a more pragmatic and sometimes manipulative person as she learns to become a shrewd political operator. The close relationship she necessarily has with a spin doctor and with the press is shown in some detail, as is the effect of her career on her family - including the effect on her marriage.

I said the series is excellent - it is. If I have a criticism it is that there is a degree of obviousness. Once elected, it is clear that she is going to change. It is clear that she is going to become a shrewd operator and to make hard choices that will result in her ditching old friends and allies for the sake of political expediency - that's what politics entails. It is clear that it will have a damaging effect on her marriage etc etc. And some of the events that she has to deal with - a CIA rendition flight, bugging of a coalition party's offices, jockeying for power within the coalition, the dodgy activities of her spin doctor - are quite frankly run-of-the-mill stuff. But what really holds it together is the depth of the characterisation.

Great stuff. 4/5 stars - I would have given it 5/5 but for the predictable way Brigitte's character was going to develop. Highly recommended - watch it even if you don't like politics.