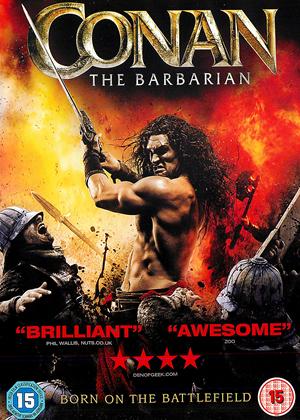 Sign up
Journey to the Center of the Earth

Reviews (2) of Conan the Barbarian

I was quite looking forward to seeing this film, being a fan of the original. However I was in for a real disappointment! The original was always a budget fantasy movie with not much in the way of a script, but this re-make is less entertaining than the original but clearly cost a lot more to make! Given that it's a fantasy sorcery style film, there isn't actually much sorcery going on, with only one real magic/sorcery scene and one monster scene, the rest is (yawn) full on sword and martial arts style fighting, which is so overdone in action films nowadays and badly at that! I found nothing redeeming about this version and found it a bore to watch, with poor acting, a bad script, average CGI and just a dull and very disappointing re-make!!

This film has 3 good points.

1. Its called Conan, a film made familiar to many by Arny.

Its to much cheese and silly to be remotely entertaining.

Our hero is a your typical millennial hero. Flawless. And with it has zero interest.

It looks like he cant even swing sword. He can pose well, but every swing has the camera cut to a new angle and new move, and i mean every swing. Its truly horrible to watch. Gal Gadot does a far better job with a sword in wonder woman. Indeed, she took an interest in that role - here our star looks like he is there to look pretty and collect a cheque. Its little wonder his roles to date have been extremely limited.

But its not just him, the whole thing is carried out in such a forgettable fashion. Its a by the numbers rubbish film.

Ive not seen the originals as rumor has it they weren't fantastic. But rumor also has it, now we have this 20xx version the originals wernt actually quite as bad as they seemed!!

One thing i know ill get when the rent the originals is Arny swinging a sword around like he means it. Not like he's on a fashion shoot.....

In 1982 ‘Conan’ was played by an Austrian bodybuilder who became one of Hollywood’s biggest action stars and then governor of California, Arnold Schwarzenegger. For its re-imagining this 2011, welcome Jason Momoa as ‘Conan The Barbarian’, this time playing Conan in his origin story and with more blood and gore than you can find in a debauched candy store.

Directed by Marcus Nispel, a veteran of rebooting classic slasher flicks such as ‘Texas Chainsaw Massacre’ and ‘Friday The 13th’, ‘Conan The Barbarian’ packs a bloody wallop and is unapologetic in lopping off heads and severing limbs en masse. See, Conan isn’t exactly bloodthirsty for no reason – his father (perfectly cast Ron Perlman) has been brutally murdered by a witch king named Khalar Zym (Avatar’s Stephen Lang) and Conan’s angry – really angry.

Conan has his eye on the prize: to avenge the death of his father and the atrocities his people has received because of Khalar Zym. And when Conan does, he finds himself outnumbered, not just from the mystical powers Khalar Zym wields but even by his witch daughter Marique (Rose McGowan). Will Conan’s sculpted muscles and love for destruction be enough to punish his enemies?

As ‘Conan The Barbarian’, Jason Momoa is a great choice since not only does he have the musculature down pat, he has the acting chops as well. Most famous for his turn in HBO’s ‘Game of Thrones’ as Khal Drogo, the Dothraki tribe king and horseman, the mini-series proved to be the Conan audition he didn’t intend to make. Convincing and menacing as Khal Drogo, it was only fitting that his overt manliness –body, voice, even hair— horsemanship, scowl, and growls should be a shoo-in for the new Conan. Jason Momoa is the new alpha male action star. Best of all, he embraces everything Conan.

Since the title of this movie is ‘Conan The Barbarian’, don’t expect plot. The draw was Jason Momoa and you enter the cinema to watch him become the Conan every gore-porn fan imagines about. ‘Conan The Barbarian’ panders to the loser boy who wants to be the ultimate stud.