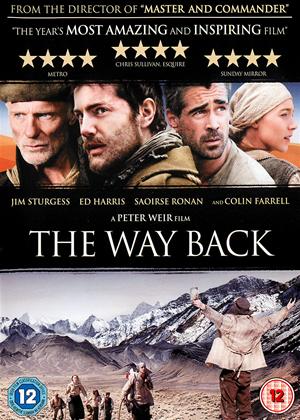 Reviews (3) of The Way Back

Serious exciting plot of story, conceived from history of USSR - The Way Back review by CP Customer

You will not waste your time while watching this film! Its all about saving lives through escape and surviving in rigorous climate conditions. What people capable of! Can not wait to watch the second disc of this serious true story!

If you're looking for action and adventure, you'll be disappointed - The Way Back review by RP

Hmmm... I was looking forward to this film by director Peter Weir ('Picnic At Hanging Rock', 'Gallipoli', 'Witness', 'The Truman Show', 'Master & Commander', 'Dead Poets Society') but I confess that I'm disappointed. The cast of excellent actors can't unfortunately liven up over 2 hours of dull dialogue with both a token American and a token woman among the 7 original characters, all of whom speak English with fake Russian or Polish accents.

The story is based on a 1950s book that has apparently now been discredited, so quite where that leaves the film's acknowledgements is a little unclear.

I enjoyed the magnificent scenery, I enjoyed (I don't think 'enjoyed' is quite the right word here) how the suffering was portrayed, particularly the desert scenes which were quite harrowing, and I enjoyed the photography and magnificent scenery. But if you're looking for action and adventure, then you'll be disappointed. What you will find is a long, dull, scenic tale with a strong anti-Russian, anti-Communist message. I'll give it 3/5 stars - it could have been so much better.

A story of human endurance - The Way Back review by EW

Having thoroughly enjoyed the book we were looking forward to seeing the film. Initially we were somewhat disappointed as the film strayed from the account in the book in several places. Once these differences were accepted ,plus the sometimes difficult to hear accents, this proved to be a worthwhile film to watch. The account of human endurance and ingenuity and striking scenery made this a worthwhile film to watch.

The Way Back review by Alyse Garner - Cinema Paradiso

Based on the book The Long Walk: the True Story of a Trek to Freedom, The Way Back tells the supposedly true story of Slawomir Rawciz a Polish Prisoner of War who is imprisoned by the Soviets in a Siberian forced labour camp during the Second World War.

Rawciz’s character Janusz (Jim Sturgess) and a small group, including an American (Ed Harris) and a Russian thief (Colin Farrell) escape from the Siberian Gulag and begin their journey back to freedom; which takes them across the frozen scapes of Siberia and through the parched deserts outside Tibet and India. The group of seven escapee’s are joined on their journey by a young girl named Irena who is also attempting to escape the Soviet regime.

Their 4000 mile trek is as trying and horrendous as one would expect it to be; they face days without food or water, extremes of heat and chill and endless moral dilemmas of how to survive. Along the way several characters die, which raises some moral questions to the group. Eventually less than half the group finally make it across the border to India.

An inspiring tale indeed, but this film does not do it justice in the least. Somehow it manages to make the journey dull and tedious and the characters unlikeable. The only character you feel any particular compassion for is Janusz himself and I was pleased when he and his wife were reunited at the films close. The only reason his character stands out at all is the love and forgiveness he holds for his wife who was tortured into accusing him of crimes against the Soviet Union. The other characters have equally shocking and sad histories, including the death of a child, yet somehow the film makes them seem insincere.

In part this may be because the quality of the acting in some places is quite low. None of the roles stand out as it is so the unbelievable style of Saorise Ronan – who has previously been hailed for her performance in The Lovely Bones – hardly helps. Having said all this it was better by far than many such epics and interesting enough to hold my attention, what the film essentially lacks is perhaps what should lie at its very core, a sense of hope.