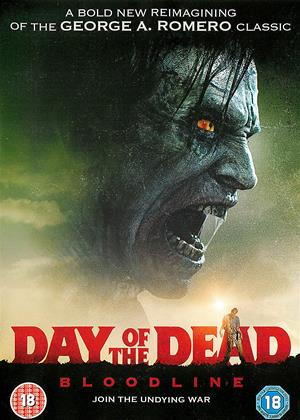 Rent other films like Day of the Dead: Bloodline

Reviews (1) of Day of the Dead: Bloodline

Undead blandness - Day of the Dead: Bloodline review by NP

For a film called ‘Day of the Dead: Bloodline’, this delivers what you would expect – nothing more, possibly slightly less. Rubber faced zombies stalk the city street set and deliver much theatrical bloodletting: cascades of the stuff shoot out toward the camera. Then we get to know the characters – sullen, pretty, some in love with each other, most just delivering deadpan military-isms: earnest recriminations and stoical retorts. Curiously, it’s a bit bland, the gore scenes committed perfunctorily, creepy moments and dark corners just the same as you will probably have seen before, rolled out with an alarming lack of tension.

In horror films such as this, heroic leads have to make illogical decisions. You could blame heightened emotions, the stress of the relentless apocalypse, or simply the need to place them in jeopardy. But they’re such a torpid bunch, you’re not really bothered about what happens to most of them.

Zoe, the main character, is well-meaning, pretty, brave, and is ultimately responsible for the death of hundreds. Most interesting is Max, the undead attempted rapist regularly taunted at close range by our heroes. My score for the film is 5 out of 10.