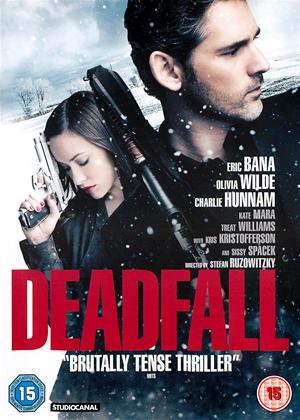 Competent thriller, worth a watch - Deadfall review by RP

Set in Michigan but filmed in Canada, this is a competent thriller with (mostly) competent acting and a competent storyline. The photography is excellent and the snow and blizzards make an excellent backdrop for the story.

It's about families. Baddy brother and sister (who had abusive father) have just robbed a casino. Goody Olympic silver medallist boxer, just released from prison, estranged from father but has good relationship with mother. Young woman cop, working for over-protective father, the local Sheriff. These family relationships collide as baddies on the run hit a deer, crash, and make a run for it. Sister is picked up by boxer, who takes her home for a Thanksgiving dinner. Woman cop chases baddy brother, who invades the Thanksgiving dinner before final shoot-out.

It's not bad, plenty of shooting, not too many thrills. The supporting actors include Sissy Spacek (good), Kris Kristofferson (wooden), Treat Williams (wooden) but the main parts are OK considering that the men are respectively Aussie and Brit. Unfortunately the family relationship thing gets in the way of the story and the script is a bit on the weak side. As a Brit, this thing about Thanksgiving is all a bit alien to me - and given that Thanksgiving is in November, do they really have blizzards that early? Thank goodness for a temperate climate!

A competent thriller, worth a watch. I'll give it 3/5 stars.

For the millions of us not living on a continent as huge and versatile as America the concept of one country experiencing such vastly different landscapes and weathers at any one time may seem a little unfamiliar. Once you’ve got your head around the idea that in some parts neighbouring States may hold entirely different political, religious and cultural views to another the key turning point of Stefan Ruzowitzky’s thriller Deadfall becomes easier to digest.

The film centres on two siblings, Addison (Eric Bana) and Liza (Olivia Wilde) who have taken up the family trade of robbery; as experienced con artists the film begins as they speed away from a successful heist at a casino in Michigan. However the changing weather is against them and when the road turns icy they find themselves caught by a cop. Reluctantly the two kill the policeman and decide to split up to make it easier for them to escape; agreeing to rendezvous at the border the two go their separate ways but their simultaneous journeys, in many ways, could not be more different.

What struck me most about Deadfall was the range of people Ruzowitzky managed to get on board, alongside Wilde and Bana the film includes performances from Charlie Hunnam (Sons of Anarchy) Kris Kristofferson (from the Blade trilogy), Sissy Spacek (Carrie) and Kate Mara (Shooter) as characters encountered by the siblings on their separate travels.

Thanks largely to the performances, though the general undertone and unusual (yet effective) choice of setting, Deadfall is a sleek and interesting thriller. It doesn’t dazzle, but it does have the occasional shine of sun reflected on ice; with a well structured yet intricately woven story Deadfall is a pleasant surprise.