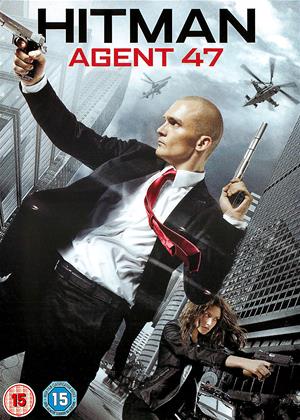 Guns and superhuman skills in killing anything that walks. Sounds familiar? Come back Sean Connery with 2 good fists.

Roger Ebert remarked that the 2007 Hitman movie stood right on the threshold between video games and art. That may have been the highest praise he’s bestowed upon a movie based on a video game - a media he referred to as anything but art. Whether it was the leading performance of Timothy Olyphant or the direction of Xavier Gens, there was something to that movie adaptation of IO Interactive’s video game that seemed to tip the scales. But any hope of the Hitman franchise perhaps being the one to launch video game adapted movies out of the mediocrity curse are dashed by this sequel.

Missing from this sequel is Timothy Olyphant, replaced by the lesser presence of Rupert Friend. Slipping into a suit and going bald with the iconic barcode on the back of his head, Friend just doesn’t fit into the role of Agent 47. Here is a character that is supposed to be seen as the Terminator of secret agents and just comes across as a young man playing dressup. His mission - should you choose to buy into it - involves tracking down agent clones trained to be the perfect assassins. This leads to hyper-aware sleeper soldier Katia (Hannah Ware) and super hard-to-kill soldier John Smith (Zachary Quinto). Katia finds herself uncovering a secret plot that lead to the disappearance of her father, the development of a super-soldier drug, an evil syndicate and I’m bored.

Heavy action scenes favor character development in this picture. There’s no time for witty banter or building of relationships - not when there are car chases to be had and goons to slaughter. Director Aleksander Bach throws many wild sequences at the screen including turbines that suck up the bad guys and cars that smash through walls. But there’s an implausibly ridiculous nature to it all that keeps all the action firmly juvenile. At one point Agent 47 is fleeing from secret agents when his car is harpooned by multiple hitmen on different buildings - holding the car down so they can zipline down the ropes. Why were all the bad guys so perfectly placed for a car they didn’t know would run directly through that intersection? The answer is that they needed to be in place so that Rupert Friend could perform a cliche shootout where he spins around shooting two pistols.

I know I’m supposed to turn my brain off for these moments, but my grey matter politely asked to come back in when it realized there were no interesting characters. Hannah Ware is a complete bore - trying to become an agent so that she can be just as bland as Agent 47. And though Zachary Quinto played a villain for years on Heroes, he can’t seem to evoke that evil charm with such a dull character to work with. What would you expect with a character named John Smith?

Perhaps the most baffling aspect of all this is trying to decipher just who this picture is intended for. It doesn’t follow much of the secretive nature of the video games to appease its die-hard fans and it doesn’t serve up enough creative action to satiate the thrill-seeking audience. There was most likely some executive meddling to attempt to please both sides of the aisle - resulting in a movie that entertains neither. Best guess on the intended audience? The younger crowd who has yet to see more coherent and intense action movies.

Hitman: Agent 47 is as cold and emotionless as its protagonist - getting in and out to fulfill its job without any surprises. It’s a product so artificially conceived that I begin to wonder if my reviews have become just as mechanical. I can’t really muster up any hate or eye-rolling for a picture such as this. It just does exactly what you’d expect - bore with a plot that's old hat and action scenes that sounded better on paper or in storyboards. And though I don’t like going into movies expecting to have a bad time, my reaction was mostly what I expected. I stamp this video game movie with the mark of low quality yet again, hoping I won’t have to do the same with the next. Seriously, I REALLY want a video game movie that isn’t a-typically cloned from this garbage of a template.