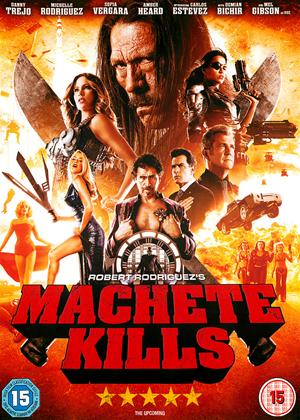 I am normally a fan of Robert Rodriguez, Desparado, From Dusk Till Dawn and Sin City are all great films. However, I just did not get the first Machete but thought I would see if the sequel was any better. I should not have bothered, to be honest this was worse. The action scenes are poorly executed, the acting awful and Danny Trejo should stick to supporting roles. I understand it's Grindhouse and tongue in cheek but there is no element of fun here at all. Mel Gibson looks bored about the whole thing , I know how he felt.

Admittedly I didn’t enjoy the first Machete film as I thought as a B movie spoof it didn’t quite gel. The film felt like a big budget actioner and therefore the surreal aspects of the story didn’t play well. The sequel strives to be the campest film you will see in a long while and thanks to a killer performance by Mel Gibson it definitely keeps things memorable.

The film follows Machete (Danny Trejo) as he sets out for revenge against a mysterious foe with the blessing of President Rathcock (Charlie Sheen). Along the way he encounters many enemies from split personality cartel drug runner Mendez (Demian Bichir) as well as arms dealer Voz (Gibson), a sociopath with a hidden talent.

Clearly director Robert Rodriguez threw everything into this overstuffed but delicious sequel with a cast full of big name stars willing to do a variety of weird and wonderful things. Trejo plays the straight as an arrow Machete with subdued glee as he both plays into the films overblown style while still maintaining Machete’s oblivious nature.

The list of cameos proves endless but in the end the film builds its best scenes around Gibson who makes Voz both a dangerous and captivating villain while turning him into a joke in the same shot. Gibson has always been good at imbuing his performances with different sides (see The Beaver) and he does it with ease here.

As always the film provides plenty of blood and guts to keep viewers squirming but the film’s most inventive moments are the genre mixing elements as the film plays with genres like the western, sci-fi, action of course and finally Spanish cinema in general.

The film keeps the mania light and the violence bloody while creating some inventive and physics defying ways to kill or maim enemies, something that both amuses and disturbs. Rodriguez has improved a once confusing series into a masterclass in spoof cinema well worth watching.