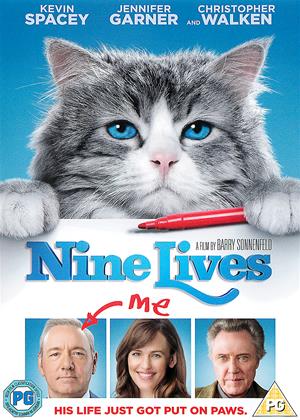 This knock-about comedy was just what I was looking for at Christmas - when you don't want to think TOO much and want a comedy to just wash over you.

The great Kevin Spacey plays a heartless billionaire who after an accident which leaves him in a coma finds himself in the body of a cat.

Christopher Walken (himself a big cat lover in real life) plays a mysterious pet shop owner SO this film is basically a new version of all those old spooky Hammer films where someone buys something from a mysterious magic toyshop and then THINGS HAPPEN. Gremlins and Karate Kid also use this trope.

Much fun ensues though much is also CGI - some really silly scenes of cats falling onto their backs and drinking alcohol - neither of which any cat would ever do.

But, despite these niggles, and despite an ambiguous ending (we need to know more about what happens to ALL characters!) this is still great fun. I could watch it again now! It's only the inaccuracies about cats that make this a 4 and not a 5 star review.

Even Kevin, ex proper actor, even stage in UK, has gone for Sky series bandwagon and now becomes a cat. Is OK film for kids at Xmas though. Harmless fun.

Exposition the mov…I’m sorry. Train wreck: the Movie is a bold exercise of how much money studios can spend to make the dumbest movie possible. The answer is 30 million dollars, and the result is nothing more than a brown litter that’s sitting at a bottom of a box and slowly gaining conscience because it too wants desperately to escape this nonsense or whatever you call it. I mean, it’s okay really: not all movies can be Lawrence of Arabia. But then again, this is the Lawrence of Arabia of awful.

Yes Barry Sonnenfeld, we get it: this is a movie aimed toward very young kids. Still, it manages to be a bore fest devoid of laughs, cuteness or any ‘magic’ that makes these kinds of movies at least barely watchable. Yet still, if only something within Nine Lives was coherent enough so that it at least could’ve been imposed onto itself as a redeeming factor in a chaotic mess of the feline breed, I could’ve given this movie a pass. But no. Nine Lives has no redeeming factor whatsoever, and it can be safely stated that this film is an utter disappointment and a new low for everyone involved in making this project happen.

Second of all – the acting. It was like someone pointed a camera at Kevin Spacey and the bunch, yelled at them to act like they’re acting and put the whole thing on tape. Heck: they’ve probably even lied that everything would be cut later so that it would make a tad bit more sense to viewers. Or maybe the producers bribed the people in front of the camera with something more than mere coins. Who knows? I don’t, so a reason plus not to care.

The story in Nine Lives, somewhere deep at its core, has its fair share of cheesiness and was probably way funnier than what we as the audience got. Rich, narcissistic businessman neglects his family in order to expand his assets even further. Meanwhile, he doesn’t like cats, so of course – he ends up metamorphosing into one.

It would’ve been okay, if only the producers took clues from, say, Cats & Dogs, which I know for certain I enjoyed it as a kid. Back there, even when animals talk it feels more natural than Nine Lives’ attempt to even CGI the cat at given times. It’s a tale of redemption without redemptive qualities that ends as it began – following the cyclic narrative of a mere status quo.

Sound and music is there, present. Nothing wrong with it. Picture moves, frames change, people talk and then talk some more: in a boardroom arguing whether or not they should hold off selling stocks and build upon their greed some more. Marketing as a fun, family experience, Nine Lives surely breaks this stereotype by holding more meetings than Wall Street and Wall Street 2 combined. And when the twist finally comes, you’re just glad it’s all over.

See Nine Lives only if you’re not afraid of losing some brain cells in the process of doing so.