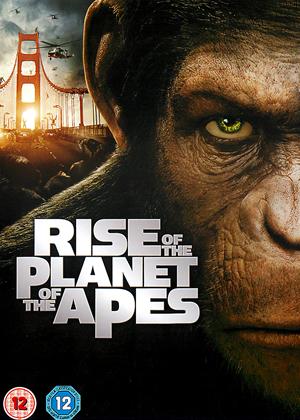 Rent other films like Rise of the Planet of the Apes

Reviews (4) of Rise of the Planet of the Apes

It will always suffer from comparison with the Charlton Heston original, but this is still a good film. The first hour is particularly good and introduces some interesting themes, although it does run out of ideas soon afterwards and becomes a special effects/chase film. Andy Serkis is great though as Caesar - his use of human facial expressions is amazing.

A million times better than the Tim Burton rubbish.

Important point - do not turn off the DVD once the credits start to roll!!

Go the apes! - Rise of the Planet of the Apes review by AB

Was I the only one rooting for the apes in this film? Wonderful prequel to the genre, explaining Caeser's 'genesis'.

A worthy prequel. - Rise of the Planet of the Apes review by CP Customer

I'm not much of a fan of the Planet of the Apes movies, but this was a surprising good film with really good storyline and a consistent amount of action throughout. Some of the CGI was a bit flakey but the emotion in the eyes of the apes, especially Ceasar, was incredibly well done. As another reviewer pointed out, don't turn off when the credits begin, there's an extra scene after a few seconds.

Overall, this is a worthy prequel to the 1968 original movie and far superior to the Tim Burton remake. Well worth renting and looking forward to seeing a sequel.

This is an enjoyable movie to watch, with excellently realised apes, and a simple enough storyline. Nowhere near as good as the original Planet of the Apes, but better by far that the more recent version............ One thing that I thought a shame was the Hollywood need to make the baddie British - you hear a British accent in a movie like this and you know that's tnhe villain! If they used an ethnic group like this it'd be called racism! I also thought it a bad casting choice to cast a black British actor in the role. The original POA movie and script from the 60s was full of racial references to the civil rights movement of the time and segregation/discrimination of blacks in the US - that's why all the main human characters were white. Casting a black man in this role took away from that - perhaps deliberately.........The science in this movie is all hokum, of course, and I actually laughed out loud when a character started coughing a little - this always means DEATH in any costume drama, and this movie too!..........The end of this movie screams 'sequel'. I fear there will be one because of the success of this. It will be downhill from hereon in then.......This movie has made me want to see the wonderful original from 1969 (?) again though; I watched it on TV in the 70s as a boy and did not know the twist at the end when I saw it: that movie is one of the best of the 70s. I fear no-one watching it now will enjoy that innocence. This movie is packed full of references to and lines from that film though. Maybe watch them back to back?