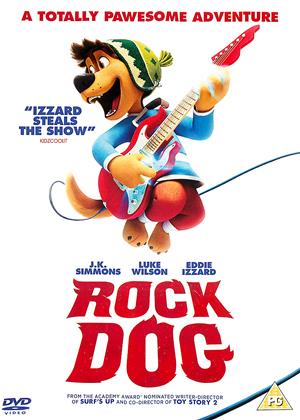 So this is a weird one - based on a graphic novel from Honk Kong called TIBETAN ROCK DOG. Half the writing in the film, and credits, and style of animation and architecture and food is Chinese! They even eat chips/French fries with chopsticks!

Having said that. it's a so-so adventure. Though not original. Occasional laughs, silly ending, baddie wolves etc.

No doubt kids will find it OK but I suspect they'd find the beginning boring coz it's so slow and take ages to get round to rock music - which, weirdly, is played on Chinese-style string instruments. The theme song is also Chinese in the pentatonic scale.

So weird and so-so. But it really doesn't know what it is - Chinese or Western - and succeeds in being neither.

I really enjoyed this film, the music is great, Eddie izzard is wonderful as the worn down rock star, lots of humour, and a feel good classic, a refreshing animation, just made me feel warm and happy ??

Rock Dog is the type of animated film I wanted to root for. Yes, it’s a familiar story of an underdog struggling to achieve his dreams, but it’s presented with a fresh angle. The characters are likable, the setting is uniquely varied, the animation is solid, there are no tired gags and, for a movie about rock ‘n roll, there’s no annoying pop music. And, yet, there’s something missing here. It’s that little spark of becoming lost in the scenario that is usually present in animated films that make them resonate more memorably with kids and adults. It’s not something that could be improved with a bigger budget or better cast, presenting a film that is just one note short of being a memorable piece of animation outside the big three of Disney, Dreamworks and Illumination.

Bodi (Luke Wilson) is a Mastiff who was born to defend his Tibetan village with his kung fu master dad (JK Simmons). But Bodi isn’t as interested in learning about mastering chi and shooting energy blasts from his hands; he’d much rather pick up a guitar and strum an original melody. Realizing he can’t change his son, his dad allows him to leave the village and go to the city to prove himself as a rock star. Of course, he’ll be slightly disillusioned once he gets to the city, but refuses to be intimidated by other local bands. He’s so overly chipper and sure of himself that he believes meeting and being trained by rock star legend cat Angus Scattergood (Eddie Izzard) is in inevitable.

It’s not until Bodi attempts to meet Scattergood that the movie starts to become interesting as the two play well of each other. Bodi continuously tries to invite himself in for a lesson, despite Angus’ various security features of robotic mice and catapulting welcome mats. But Angus needs this dog’s chipper spirit and musical heart to help finish his single that is already late. He eventually agrees to let Bodi into his spacious studio for a faux lesson to secretly complete his new song. It’s underhanded, but never comes off as maliciously devious. He’s a good cat and can recognize when he’s being a jerk to make amends. As his character spurns towards the inevitable lesson of teamwork, he has some of the best lines with the best delivery by Izzard, nailing the posh and closed lifestyle of a rock star with ease.

Their relationship works so well that it’s surprising the movie adds in too many extra characters with nothing to do. There’s the fox Darma who could be Bodi’s love interest, but she’s never developed enough to fulfill this role or any role for that matter, mostly acting as the movie’s only female side character. There’s the mellow goat Germur, but he’s only present for sly jokes about constantly being high. There’s cocky snow leopard Trey that could have been Bodi’s rival, but they never have a proper moment to showdown in a guitar playing competition where Bodi finally bests him. Sam Elliott voices a narrating yak Fleetwood (ha ha, very funny), but he he does little more than reprise his familiar role from The Big Lebowski.

There’s also a bookend plot about Bodi’s village being survey an evil wolf gang that wants to eat all the sheep residing there. Led by corporate CEO/mafia wolf Linnux (Lewis Black), they amass plenty of resources in the city to easily overtake a village guarded by one dog with a mystical punching ability. And, yet, they bide their time for the right moment to strike. One would think that if it took them this long to eat sheep that they’d just order sheep takeout by this point. It’s never established how badly these wolves want the sheep considering how they already have piles of cash, nice suits, slick cars and a nightclub where they feature cage-match wrestling. There must be some law against eating sheep inside the city that is presenting them from dining on that sweet sheep meat. Clearly the filmmakers haven’t thought this world through as thoughtfully as Zootopia where we know what the law is on animals hunting other animals.

I liked Rock Dog more for what it didn’t do as an original animated movie. The writing doesn’t go for the easy jokes of Angus snorting catnip or Bodi chasing his tail as a lesser film would have become lost in these gags. The songs sung by Bodi and Angus are all original songs, refusing to retreat to familiar commercial music as most of these animated movies tend to favor. The animation has its own unique style and doesn’t appear to be directly copying any other animated film.

All of this makes Rock Dog a pleasingly confident picture that aims to be different and standout. If it had only shed a few characters, focused its central story a little more and delivered at least one memorable song, it might have even been great. As it stands, however, it’s a picture that is timid enough to not annoy the parents yet energized enough to hold the attention of children. And in the current landscape of manic animated movies begging for the attention of kids, that’s a very good thing, even if its aim is slightly off. I’ll gladly take another Rock Dog over something as commercial as Sing any day of the week.