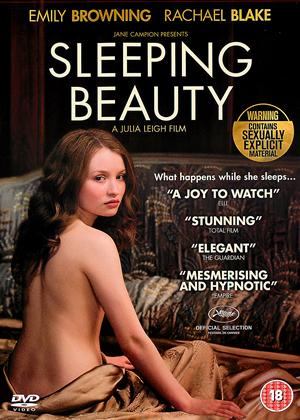 Not to be confused with the Disney classic, this year’s Sleeping Beauty is an Australian drama starring Sucker Punch’s Emily Browning as disillusioned and distracted student Lucy, who is so utterly disconnected from her body that she is able to insert tubes down her throat as part of a medical experiment without seeming to feel them. It is a movie about emotional distance that deals with the rather upsetting subject matter with quiet grace.

Several things strike me about Sleeping Beauty firstly Browning’s performance which is wonderful, despite spending large parts of the film completely and unashamedly naked it is the strongly enchanting absence of her eyes that will draw your gaze. After the poor success of Sucker Punch, Sleeping Beauty could be the piece that defines Browning’s burgeoning career.

Secondly it’s the subject matter which is both tragic and bizarre, Browning’s disenfranchised portrayal of the sex trade is both thought provoking and courageous. Despite this it is hardly an easy film to watch and requires a certain amount of concentration and active submersion.

Finally it’s the movies aesthetic, which for first time director Julia Leigh is technically exquisite: catching the line between surrealist fantasy and distressing reality right on the knife edge. If it weren’t for Leigh’s careful hands the movie would simply dissipate into an incoherent tragedy; instead it is both beautiful and haunting and lingers like a dream on the edge of your consciousness for some time after the thoughtfully reflective ending.