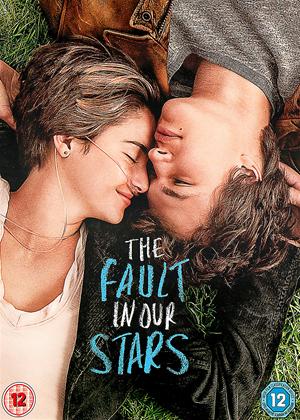 Rent other films like The Fault in Our Stars

Reviews (4) of The Fault in Our Stars

beautiful - The Fault in Our Stars review by JL

I had already read the book to this film before i saw the film and with most films that are based on a book are not very good. I thought they were going to ruin but i was so wrong. it made me laugh, cry and bring a smile to my face throughout the film.But i would recommend bringing a box of tissues!

great story - The Fault in Our Stars review by gazmb

This is an amazing film , the story makes you smile , laugh and cry, A young couple fall in love both have cancer . This film is worth watching , but you will need a box of tissues for your eyes.

A must watch! - The Fault in Our Stars review by Jay

We knew what to expect from the hype but luckily it did live up to it.

Brilliant cast and an emotional roller-coaster from start to finish. It's portrayal of cancer suffering victims is very hard hitting but in a thought provoking way. Now off to read to the book!

Awful - The Fault in Our Stars review by ll

Given the above reviews this film is clearly an 'aquired' taste. We found it oversentimental and a schmaltzy Hollywood approach to a difficult subject. We eventually found the portrayal of the main characters as wooden and the constant cheerfullness downright irritating.

The Fault in Our Stars review by George Hooper - Cinema Paradiso

The internet has been on fire since the announcement of the movie adaptation of John Green’s popular YA novel The Fault in Our Stars with fans wondering how Hazel Grace Lancaster would be translated to screens. Those wondering if it was a resounding success or a epic failure will be surprised that it is neither, in fact it dips into both territories throughout its run while never quite feeling like the emotional tale it really should be.

The film follows Hazel (Shailene Woodley), a young girl dying of cancer who has cut herself off from everyone and everything as she slips into a cycle of self pity and depression, despite the protestations that she is not depressed. However when she meets Augustus (Ansel Elgort) at a support group she sees life differently as she starts to see the little things in life that her parents (Laura Dern and Sam Trammell) are dying for her to enjoy before her time runs out. It’s not long before each are invested in each others lives, something that will bring heartache and joy.

Woodley, much like in almost all of her prior films since The Descendents is fantastic, she makes a poorly scripted Hazel seem outspoken, smart and someone who doesn’t deserve to be pitied but emulated. The film cleverly relies upon her to sell its story and while the film does feel like a two man show, Elgort is less than stellar. He squanders the better of the two characters with faux charm, idiotic deliveries and a lack of any kind of heft. The films final act cleverly plays around him improving proceedings.

The most disappointing thing about Fault however isn’t the fact its lead male doesn’t quite sell it, its the fact that every shot, every moment in this tale is painfully choreographed. The picture is a staged progression of young love but with the more interesting Green twist of one of them having cancer. In fact despite Fault’s excellent soundtrack it squanders its unique feel in favour of predictable melodrama, never quite taking advantage of everything it has going for making this film decidedly average.