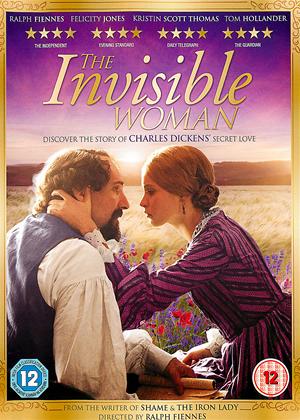 Reviews (6) of The Invisible Woman

I love Charles Dickens - I am a great fan of his novels and world-view - so I was looking forward to this film. But oh my goodness what a slog it all was.

SO slow - due to 1) a flat script by BBC golden girl Abi Morgan who always focuses on women's interest and portrays women as victims (only she could write a movie script about Mrs Thatcher which did not feature politics at all, but focused on Mrs T as A WOMAN...zzzzzz....); and 2) very dull direction by R. Fiennes which seems to prove the axiom that actors shouldn't direct.

I was yawning and looking at my watch long before this finished.

The script is also confusing and switches back to flashback when Dickens was alive from the 'present' in 1883, 13 years after his death, at random. Moreover, I do not believe the feminist angle imposed on this tale by the writer (who has decided to misrepresent history and show Mrs Dickens as a victim harshly treated when the evidence shows she was just a typical Victorian wife and happy enough). The stuff about Great Expectations being related to Dickens' affair is entirely Morgan's invention.

Very disappointing and boring. One star - but a half a start more for the views of Kent and Gad's Hill, and the good costumes and make-up.

Very disappointing. The title made no sense, the story was muddled and difficult to follow - we nearly gave up half way through and wished we had at the end.

At the outset this period drama looked excellent. Good cast, and brilliantly filmed. It was however at least 30 minutes too long. There were many long drawn out irrelevant scenes. You then find that you had missed out on anything that was relevant because the story jumped ahead. It was presumed the watcher would know what was going on. All of a sudden Charles Dickens had set up his girlfriend in a house and was having a relationship with her. (When had that happened?) Up until then any involvement with her had just been alluded to. She then had a stillbirth and said a tearful goodbye to Dickens and it later turned out she was still having a relationship with him. Confusing. Sadly I will never get those minutes back that I wasted watching this film.

Not what we were expecting at all. The story kept us riveted until the very end.

OK - the writer does take a couple of liberties with the story - but hey, this a film not a BBC 4 docu biography. The acting is wonderful, the cinematography rich and the lighting suitably atmospheric.

Yes, I agree that you have to keep your wits about you when the flashback happen - but the film is hoping that we are intelligent enough to pick up on that.

Very enjoyable and worth watching.

What the Dickens? - The Invisible Woman review by NC

Fiennes does the acting thing, again, very well. Not sure how factually based the film is, but is pretty credible. Like the Holmes film, is part BBC supported, so their attention to detail and period shines through.............still object to paying more than my car tax to BBC each year as a form of enforced taxation. Never watch any BBC, so why should over half the populace pay for the other half??

Dickens, the Enid Blyton version - The Invisible Woman review by AS

Like Abel Magwitch in the swamp, director Ralph Fiennes wallows hopelessly through this mire. His only admirable skill is the ability to turn what was probably a half-page synopsis into an almost two-hour movie. Yet, even given this duration, there is a complete failure to get a grip on Dickens the man. The author's novels are tales of sex, violence and passion, shot through with dark memories of his own childhood. He had a wife, a mistress and fathered umpteen children. He was a ruthless exploiter of celebrity, travelled ceaselessly in pursuit of money, financed plays, theatres and businesses. Fiennes, both as actor and director, fails utterly to convey this character, depicting him as a cavorting jolly good sort, his moments of emotion conveyed by staring extendedly into space. The invisible woman of the title, Dickens' lover Nelly, played by Felicity Jones, is just that, making love and lust look as exciting as ludo on a wet February afternoon. If you want to learn about Dickens and his passions, read his books, steer clear of this emasculated wraith.