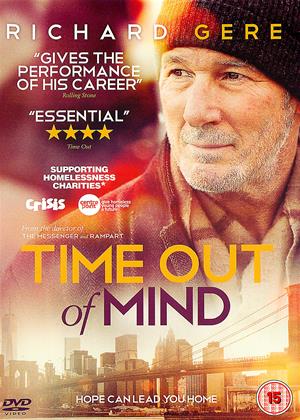 Reviews (6) of Time Out of Mind

My wife couldn't get the long clips in Paris Texas, but at least the Ry Cooder music stays in your head, and could get some empathy with Harry Dean Stanton as Travis. Had something quirky going for it.

Third of the way through the film I couldn't care less what happens to Gere's character.

Lots of filmotography stuff going on. Never seems to gell. Just depicting the lower levels of American society, and the wasted people therein.............

Awful - Time Out of Mind review by Dean

This is the first film in a very long time that I could have just switched off. I stuck with it for about an hour but then forwarded through chunks of the film in desperation for something interesting.

I get the feeling this has been filmed and produced by someone arty as the film is shot from some very strange angles or behind windows and doors. Unfortunately it doesn't make the film any more interesting or enjoyable.

You kind of have to guess the underlying story as the film progresses but by the time you start to realise what has happened to Gere's character, you just don't really care anymore.

A movie with a difference. - Time Out of Mind review by BE

Stripped bare of the usual Hollywood schmaltz, this movie was a winner for me. Seamlessly directed by Oren Moverman, unusual camera shots and with Richard Gere as you've never seen him before. I would class this as an art house movie as the only real drama is cerebral as opposed to action. Not for everybody but a very thoughtful piece of cinema.

TIME OUT OF MIND - Time Out of Mind review by SM

Sorry but too slow for me, I'm afraid. I didn't think Richard Gere was believable in this part. Some reviews think it is an arty film, so perhaps too arty for me.

Oh dear - Time Out of Mind review by AW

Don’t know what to say really. Watched the first twenty minutes in which nothing happened. Watched the next twenty on fast forward - Richard Gere wandering around aimlessly. Persisted a bit longer but never got the plot, I don’t think there was one.

Such a disappointment for Richard.

The face of homelessness - Time Out of Mind review by MG

Time out of Mind is a rather fascinating cinematic experiment which lingers with you long afterwards. Richard Gere is superb as George a homeless man whose life is crumbling to dust in front of his eyes. I say "experiment" as this American film conforms to none of the classical rules of American cinema. It is like a fly-on-the-wall documentary on the homeless and certainly opens your eyes to the reality of life on the street. Check your dramatic expectations at the door and you will enjoy this compelling look at the American underclass.