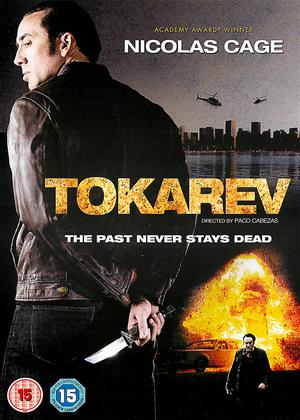 This derivative 2014 actioner, entitled ‘Rage’ in the States, is simply monotonous. As too often these days, Nicolas Cage plays it dour as he goes on the rampage in search of his missing daughter. Numerous shoot-outs merely up the yawn-count. There’s even a bog-standard frenetic car chase. Have today’s directors learned nothing from Bullitt? One star for a thunderous score that tries to inject some life into affairs, otherwise it’s B-movie fare that wastes the talents of all concerned.

Cage must have needed the money for he is not suited for the part of a grief-stricken father - not much grief, not much anger, too easy to play it cool while he looks for his daughter's kidnappers. Body count far too high before cops even *think* about doing something and then they are useless.

Tokarev, also called Rage, seems like your typical action film. This is definitely true in some aspects, but a major, and unexpected, twist makes it deviate from the norm. With Nicolas Cage as the leading man, Tokarev looks to have what it takes to redeem Cage’s career.

The film follows Paul Maguire (Cage), an ex-criminal who - with his two friends - once ambushed and robbed a Russian mobster, and has since used the money to establish a good life for himself, his beautiful wife and his teenage daughter. Just when he thinks the past has truly been left behind, his daughter is kidnapped, and he reforms his criminal gang to find her, and mete vengeance on her keepers.

From first look, this is not a new story. It does appear very similar to Taken - people don’t need to keep saying that like Taken was the first of its kind. But, somehow, the film does not feel old and rehashed. It eventually shirks the ‘revenge action film’ conventions, and focuses more on the emotional side, rather than simply getting justice and being tied-up in a neat little bow. Without spoiling anything, the film does involve a good twist, which helps to set it apart from the usual action films.

I also really enjoyed the acting. Firstly, we can all agree that Nicolas Cage has been apart of some duds (National Treasure franchise and Ghost Rider), but he has also shown that he is capable of being brilliant (see Face/Off and Con Air). He really pulled it together for this film, and played the lead role well. Cage’s co-stars - Danny Glover, Peter Stormare, and Pasha D. Lychnikoff - are also well-known for their ‘action film’ roles, and it is no surprise to get a good performance from them.

The main things for a good action film are: fight scenes, car chases, and shoot-outs. Tokarev has all of these. The choreography didn’t feel forced, and was entertaining and engaging.

Every film, book, television episode, etc., has a meaning behind it. Kid’s stories are more obvious in their meaning, and the theme of Tokarev is clearly about revenge, but also about our attraction to violence. We are all so predisposed to it, and have an almost knee-jerk reaction for retaliation.

The film has received overwhelmingly negative reviews. I don’t think they are warranted in this case. The main complaint was about the story, saying it was too cliche. Cage was also in their sights, and his performance was criticised. While I don’t think this film was as good as Face/Off and Con Air, it doesn’t deserve this backlash.

I have given this film four out of five stars. Everything you want from an action film is supplied, and the twist raises it further. Its production budget (reportedly $25,000,000USD) does seem quite inflated, and I doubt they will make much profit, but it is a good film that should entertain the majority.