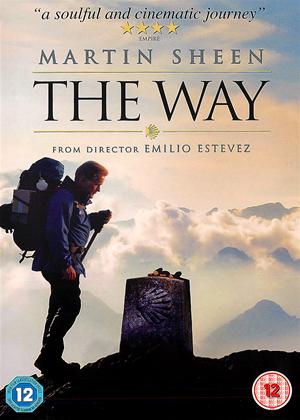 I was looking forward to seeing this as I had heard good things about it - but I found it very disappointing.

It tells the story of a middle-class American father who goes 'overseas' (that is, to France) to identify and retrieve the body of his adult son who has been killed by a freak storm as he started to walk El Camino de Santiago, a 500+ mile Christian pilgrimage route across the Pyrenees from France into Spain and on to the cathedral of Santiago de Compostela. He decides to have the body of his son cremated, to complete his unfinished pilgrimage and to scatter the ashes along the route.

Along the way he meets some seriously boring people - a pot-smoking Dutchman, a chain-smoking Canadian woman and, most boring of all, an Irishman with writer's block who has lost his faith. This last part is played by James Nesbitt - and he really is very, very boring even as his character attempts unsuccessfully to inject some life into the dull story.

I found it tedious, dull, uninteresting, turgid stuff with stilted dialogue, cardboard characters and wooden acting. I regret watching it through to the end, but I did - and I even watched the interviews with Martin Sheen (who played the lead role) and the director Emilio Estevez [Aside: who is Martin Sheen's son], hoping against hope that they would highlight something I had missed. But nope, no such luck. And I also didn't appreciate the glaring product placement for The North Face outdoor clothing company.

2/5 stars from me. And did I mention that it was boring?

A bit long winded - The Way review by CP Customer

Not as interesting as I thought it would be. The reality is, he probably would not have been able to walk that far without any previous training - he would have at the very least got a blister or two!

Sentimental but well played - The Way review by Old Devonian

This is a gentle, sentimental, easy watch and hardly veers ever from a predictable path which some reviewers have found boring. The film’s drive comes from Sheen’s character’s angry grief which he plays with conviction and as usual Sheen connects easily with the viewer. Sucked into the story after 20 minutes, even though you know a travelogue is about to assail your eyeballs, Sheen’s obvious determination to honour his semi estranged son, compels you to keep watching. The rest is predictable but I thought Estevez handled the “America meets quirky foreigners” extremely well and kept the tone believable.

A gently paced sentimental film for a quiet evening. I enjoyed it.

Disappointing - The Way review by SD

Couldn't care less about each individual's back story.

The Way is an on-foot take on the average road movie that sees a grieving father, played by Martin Sheen, walking the mythical Spanish pilgrimage route “Camino de Santiago” continuing a trail started by his now deceased adult son, played by Sheen’s own son and director of the movie Emilio Estevez.

The movie is a fairly run of the mill father-son story, which, unlike the classic Fonda movie On Golden Pond is not made more interesting by the appearance of a real father and son duo.

Throughout the movie, the distant and emotionally difficult father begins to learn to open up to people and regrets his lack of an emotional relationship with his son. Estevez appears to his father in flashbacks throughout the movie that, in all honesty, could have been left out entirely, in which his father realizes both the failings of himself and his child.

Whilst on his journey Sheen encounters a handful of other characters who accompany him on his journey, these characters range in depth and believability and once again, could quite easily have been left out of the piece all together. In fact, had the piece been more of a solitary journey of contemplation I think it would have served the issues the narrative tries to raise in a more honest and simple way than the finished piece ever could.

Despite the film’s lack of presence, a feat normally so effortless for Sheen, the movie is touching in places and the love and care Estevez clearly had for the piece is obvious, but ultimately, it remains inescapably predictable and under-whelming throughout.