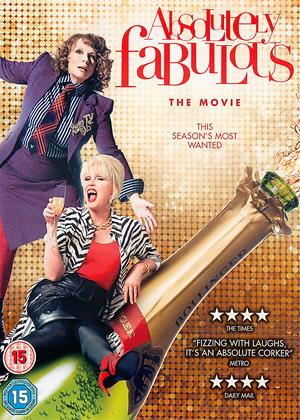 Reviews (2) of Absolutely Fabulous: The Movie

What a lot of ****o*ks - Absolutely Fabulous: The Movie review by TB

Having just suffered by watching this seldom funny, out-dated crap, can I suggest the BBC stop wasting money on further ventures on these characters. The film lacked humour, intelligence, imagination.............so if you need to kill 90 minutes of your Life with your mouth open, this could be the material to cause that. Mind you, I was not a regular of the tv series but just felt a movie may well generate entertainment. How wrong could I be! Enough.

Very poor example of a TV to Movie transfer - Absolutely Fabulous: The Movie review by AW

TV to Movie transfers rarely work well but this is truly terrible. A rehash of a rather tired, dated formula. We tolerated a third of the (short) move before giving up. Do not waste your time on this movie.

I had not seen the alcoholic comedy series of Absolutely Fabulous since the late 1990s, making me apprehensive about this theatrical movie based on the series. I was worried that the jokes would be lost on me as most TV series turned movies usually do little to differentiate themselves from their respective shows, turning a 90-minute narrative into a handful of episodes. And while Absolutely Fabulous was certainly fitting of lifting a mini-arc in the show into a feature length production, there’s just enough laughs and cleverness to overlook the multitude of in-jokes that went straight over my head.

The movie doesn’t slow down to introduce its massive cast of characters, but does give a sufficient amount of time to understand the central boozers of Edina (Jennifer Saunders) and Patsy (Joanna Lumley). Edina is a struggling talent agent, finding herself in an even tougher bind as she approaches middle age, holding onto the world of fashion and fame by mere millimeters. She hopes to make some money by publishing a memoir, but doesn’t have an intriguing manuscript when written in nonsense by her ditz of an assistant Bubble (Jane Horrocks). Patsy hangs around Edina for the usual perks of the good life: booze, sex, fashion and more booze. She serves as the nasty little enabler that coaches Edina out of her depression, at least when she’s not searching for the next piece of tail to chase.

But then the unthinkable happens as they’ve run out of champagne! Now Edina’s career slump has turned into an emergency. If she and Patsy can’t drink copious amounts of champagne, they may never stumble into a runway show or comically collapse outside the house ever again. A golden opportunity presents itself when Edina receives a lead that Kate Moss (appearing as herself) will be at a fashion party and she’s looking for a new agent. But in her fumbling to acquire the big fish, her accidentally knocks Moss off a balcony and into the river where her body is not found. Now Edina finds herself on the run for murder with the tall and drunk Patsy in tow.

To hit all the checkmarks of the show, dozens of characters from the series are trotted out for small cameos and one or two laughs. They must be considering how hard the audience I saw this with were already laughing the moment each supporting character popped up on screen. Either they’re familiar with the show or they must have been drinking some strong booze. By the smell of their breath, I wager both.

I didn’t laugh at these introduction, but I had plenty of laughs at Edina’s struggle to rise above her tailspin life as she comes to terms with her old age. For every moment where Edina slips down in the depression of the whole world being against her, Saunders finds a way to make her character still seem silly and maybe a little likable. She seeks religion at one point by trying to meditate towards Buddha, but finds herself frustratingly cursing her little statue of the fat man that doesn’t grant her peace. Another silly-looking scene finds her pedalling an exercise bike in her pool. I don’t know if this is some modern form of exercise, but it certainly looks ridiculous.

What I found most surprising about the film’s humor was its visual jabs at the world of fashion. Rarely taking a moment to point out the most ludicrous of wares, there are dozens of ridiculous fashion choices, mostly from Bubble who wears everything from a shirt with a pair of oversized glasses that drape off the neck to a suit of inflatable hashtags. For a character that is mostly written as a random joke faucet, it’s amazing how she could appear funny without uttering a single word.

Where the movie falls apart is when it has to focus in on its plot of Edina landing Kate Moss, Edina killing Kate Moss and Edina on the run. Her antics ultimately run out of steam in the third act when the movie is reduced to the old TV trope of dressing up a character as the opposite sex to marry a millionaire. That’s a last-ditch writing effort for a series on its last legs, made all the worse when the movie ends with a car chase. These developments really do enforce the identity of this movie being a collection of episodes, but this may have worked a little for the benefit of the comedy. I didn’t want to see an entire film about Edina trying to land Kate Moss or Patsy trying to marry a millionaire. But when sliced up among an overall theme of Edina coming to terms with herself, as best as she can amid her boozing and outbursts, it’s more amusing than any TV-to-movie adaptation deserves to be.