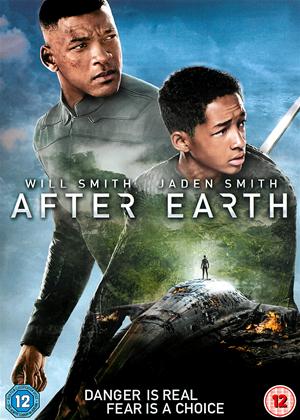 Reviews (2) of After Earth

Dulling the Senses to promote the Son of Will! - After Earth review by CS

I was much excited by seeing the trailers for this film and given the high quality acting of Will Smith and the pedigree of the Director M. Night Shyamalan, expected to be treated to a classic visual and action feast. Instead I watched a much stretched out, emotionless journey of a teenager hiking through the forest, whilst his dad sits injured back at the crashed space ship. Don't get me wrong, there are some good moments and it's an ok film, but not a blockbuster. The scripts is as thin as a sheet of tissue paper, Jayden Smith's acting is very average and Will Smith does a strange turn as the military father. Not the standard which we are used to from him and it is almost as though he is lowering his acting ability in order to bring his son's lack of up to a par! If this had been Will Smith playing the lead, then I could see it being a very different and good quality action sci-fi romp. But given that this is really a vehicle for his son, Jayden Smith, to promote him as an actor, it struggles to compensate for his lack of acting ability. Don't get me wrong, he does a reasonable job for someone his age, however for such a film it's not good enough and as a result he doesn't have the gravitas to pull of what is essentially yet another crashed on a strange planet movie. He instead comes across as the spoilt child of a famous father, rather than an actor in his own right, especially with his rather posh public school boy accent! There are strong elements of Starship Troopers here and the creature is straight out of that film. I kind of in a strange way enjoyed watching it, but at the end felt very disappointed. Really Jayden is not experienced enough to take such a major lead role and would have been better in a supporting role. The scenery is very beautiful and this was the films saving grace. Shyamalan has produced some strange and disappointing films in recent years, whilst his early output was very interesting and well crafted, it's as though success has dulled his creativity and this film is really aimed straight at the money and as a vehicle to promote Jayden Smith to the world and as such lacks any real creativity, gravitas or emotional pull. Enjoyable for a night in, but I wouldn't watch it again and I definitely would not buy it!

if you like this area of sci fi, watch it. good effects, fair story, acting - will smith, delivered by him. if you don't watch this type of stuff u may not like it as is not a normal perspective film, needs immersion and it rewards you.to any geeks I recommend it

When I saw the trailer for After Earth remember being impressed with it’s epic sci-fi fantasy hopes, and the concept of a planet thriving after having been abandoned by man kind appeals significantly to an eco-warrior such as myself. However the elements of potential scattered throughout the story are lost in an ultimately unimaginative premise, flawed lead performance and predictable screenplay.

Starring the charismatic Will Smith as Cypher, a military leader travelling past the now abandoned Earth on a return journey to the new human settlement, an entirely man made planet with a controlled atmosphere, the film begins when his ship accidentally crashes down to now human-less Earth killing all save himself and his son Kital – played by his real son, 15 year old Jayden Smith. Disabled by an injury caused in the crash Cypher watches as his son attempts to travel across 100 miles of the abandoned planet to reach the signalling beacon located in the tail of the craft that broke up as it plunged toward Earth.

Kital, burdened with the guilt of being responsible for the death of his sister and undertaking this dangerous journey at the young age of 13 is understandably shaken by the entire experience; it is the way in which the young Smith portrays this fear and uncertainty that makes much of his journey a pain to watch; swinging between the complaints of a snivelling child and the audacity of an over zealous solider he comes across as less of a tween attempting to navigate his way into adulthood and more like an actor who can’t decide on his character’s motivation or personality.

One mustn’t blame Smith Jr however, as a supposedly skilled and well established director such as M. Night Shyamalan ought to be better at err, directing… Even Smith the elder is given little to play with, communicating with his son through a camera and ear piece set up that provides footage that looks a little bit too much like it came from YouTube and playing a completely stereotypical military dad whose ability to openly emote is nil.

Ultimately After Earth is a disappointing cinematic experiment, the only redeeming features being the imagery of lush forests, beautiful waterfalls, flowing rivers and even the sight of an un-interfered with pod of whales allowed to swim within the threat of humanity. This however is not enough to make up for the poor direction and lack of story that leaves After Earth feeling as human-less as the world it depicts.