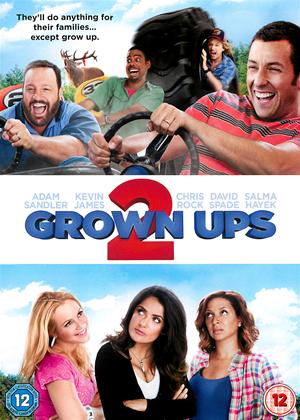 Despite the critic's review (see below) I found the opening scene the funniest of the film - not much laughter followed after that because of the paucity of jokes, scenes and situations. Very American in its humour -i.e. puerile, in a suburban setting where everyone has perfect teeth, houses, cars, jobs, money and ways of overcoming any sort of obstacle without getting into any harm

The film follows devoted family man Lenny (Sandler) and his friends Eric (Kevin James), Kurt (Chris Rock) and Marcus (David Spade). As the four of them prepare for a big start of summer blow out they discover problems with their children and significant others that make the buildup to the big party a nightmare.

Featuring little to no story and no kind of tension or strife, Grown Ups 2 is a pretty pointless viewing experience with the film having very little significant comedy to fall back on. The film isn’t made in poor taste, it actually presents some quite loving families, it’s all the characters tendencies to devolve into 4 year old boys that sinks this dire picture.

All the jokes revolve around farting, urination or sex and little else. Sandler still seems to be having fun playing the same character he has for years and while films like 50 First Dates and Happy Gilmore worked well with his overblown persona, Grown Ups 2 feels like a desperate attempt at presenting him as the family man.

Rock and James aren’t much better as they spew out tired material designed to accentuate their everyman status although neither proves likable as Kurt and Eric. The whole film just doesn’t work on any level and it feels pointlessly excessive.

Ultimately the film gains nothing from the popularity of its core cast and feels like a rehash of the first film in every unpleasant way. From the films opening scene, a sequence where a moose urinates all over Sandler’s face, to the films finale, there isn’t anything worth mentioning, in fact it’s probably best not to mention this ever again.