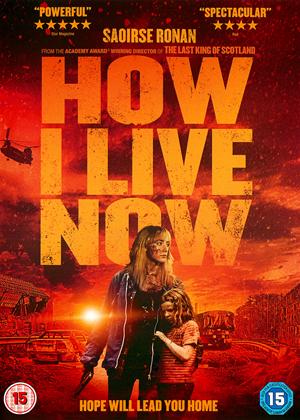 I hadn't (thankfully) read the reviews here or the plotline before watching this film. The English Idyll enjoyed by the children with their extremely irritating American cousin is suddenly and shockingly disrupted by the principle event in the film The shock is very effective if you don't know it coming, and I won't spoil it any more than the reviews here have done already. The second section of the film is a re-writing of a John Wyndham-esque post apocalyptic scenario for the modern cinema and is very effective. Saoirse Ronan is on set practical 100% from the beginning to end and carries the film magnificently - it must be one of her best performances.

At it's heart, this is a story of love, endurance and survival against all the odds. That is really all anyone needs to know before watching it.

Not quite a bomb. - How I Live Now review by Steve Mason

Starts off with a nostalgic recreation of seventies dystopian post nuclear event films, but Saoirse Ronan's alienated teen lead made it difficult to care.

For me the tale of survival should have been the main stay of the movie, that would have made it more interesting, unfortunately it isn't and for me the movie end up being to much 'teen romance' orientated.

Rubbish - How I Live Now review by HG

No explanations for what is happening, and ends with nothing happened. Don't waste your time with this film.

How I Live Now review by George Hooper - Cinema Paradiso

Genre splicing is nothing new and it has produced some clever films and some noticeable talents but when the genres you choose to mix are teen romance and war it takes a while to get used to it with director Kevin MacDonald trying to seamlessly mesh the two without that much success. It’s just hard to find this naive ideal of love believable when everything is blowing up around them.

The film follows Daisy (Saoirse Ronan), an American teenager sent to England by her father to live with his sister and her children. When she meets Eddie (George MacKay) she finds reason to enjoy life in Britain, that is until a terrorist attack ruins the family’s idyllic life in the country and forces Daisy on a grueling journey to reconnect with those she loves.

While the idea of a war film driven by love is interesting and it proves easy to find justification in Daisy’s horrific experiences thanks to it but the chemistry between Ronan and MacKay is completely neutral, effectively undoing part of the film. That being said Ronan herself is excellent as usual in managing to find redeeming qualities to a character, who on paper proves remarkably irritating. Her constant complaining about seemingly simple things, MacDonald’s idea of the modern day teenager, would grate in anyone elses hands.

Once the film finally does kick start and Daisy is left caring for Eddie’s sister Piper (Harley Bird) as they desperately cross the country looking to return home everything changes as the film becomes tense, captivating and even a little bit creepy. The war on display isn’t the modern day idea seen in movies, although a sub plot involving contaminated water suggests otherwise, it’s almost a callback to the world wars as paranoia and fear spread through the characters.

MacDonald has committed to telling a tough story and the journey Daisy and Piper find themselves on will shock you in terms of how much the two can endure ultimately making the film much more exciting with the tale of love overcoming all taking a back seat to a far more interesting tale of survival, even among the very young.